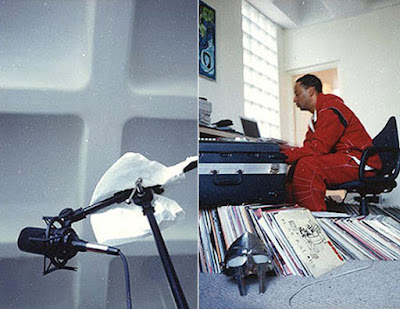 "Madvillainy" is not only one of the greatest underground hip hop albums of all time but the backstory beind its creation is almost as fascinating as the actual album itself. Its a well known fact that both Madlib and DOOM are notoriously secluded persons who's interest solely lies in creating music on some secret identity, super hero shit. It's a well documented fact that a vast amount of songs produced by Madlib or DOOM for other artists happened without either producer entering the studio with the vocalists. This is even the usual M.O. for complete bodies of work like Freddie Gibbs' "Pinata" and Strong Arm Steady's "In Search Of Stoney Jackson" which were created by the artists receiving hundreds of Madlib beats to freely pick from and record over. As for DOOM the large majority of songs produed by Metal Face are directly lifted from his instrumental "Special Herbz" series. That makes it even more intriguing that this rule was broken not only once, but twice. First during the initial "Madvillainy" sessions in 2002 when Stones Throw first flew out Daniel Dumile to L.A. and the Stones Throw offices which also housed the infamous Bomb Shelter, home of Otis Jackson Jr., and a frequent hangout for legendary musicians including Yesterdays New Quintet, Sound Directions, Quasimoto, Dudley Perkins, DJ Rels and DJ Such and of course Madlib himself. 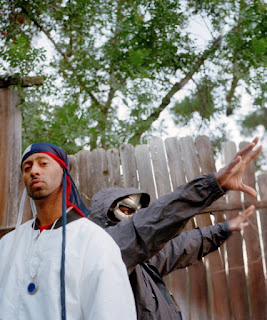 According to Jeff Jank (who would  design the artwork for the album and the singles, remembers how well the blunted duo hit it off right off the beat which quickly led them to begin work on material for what originally was suppposed to be an EP. "The most important part of their process is simply that DOOM understood Madlib right off the bat. He understood where he was coming from with the music, how it connected with the records they listened to from the '60s-'90s, and Madlib's inclination to worked on his own in privacy. DOOM was all for it.", Jank reminisces. This certainly explains the mindblowing chemistry displayed throughout the discs 45 minutes and how even the skits and soundbites thoroughly add to make it a complete sonic experience created in the minds of two villains. The experimental sessions threw out the usual rap song format, adopting a free jazz formula where short tracks often lacked hooks or a defined number of bars, weaved together with insane dialouge samples from movies, cartoons and comedy routines. Smoking mad blunts and chilling in the California sun, these initial sessions truly sparked a powerful bust of creativity and raw energy which resulted in classics being transfered from the soundboard to reel and on to cassette. At the end of these sessions, which had went incredibly smooth and friction free, a free form hip-hop masterpiece had been created and according to Jank the album or extended play was more or less done as the duo parted ways, satisfied with their accomplishment.

But the story of "Madvillainy" was far from being over, as heaps of problems was about to arrive. In late 2002, Madlib, J. Rocc, PeanutButter Wolf and photographer/directors B+ and Coleman traveled to Brazil to partake in the brilliant Mochilla sponsored documentary "Brasilintime", a document of two generations and styles of musicians from Brazil and the US creating something musically worthwhile together (look out for a separate post on that). The reason I mention it here is because it was during this particular trip that Madlib lost two CD-R:s from his hotel room, featuring the rough versions of the at the time still unreleased Jaylib and Madvillain projects. As mentioned above, the unmastered Madvillain sessions on that CD-R was at the time more or less a representation of what was intended to form the retail release. As such, the leak really soured things for both artist and the label who believed that the already available material would make for a much harder sell. And geting the mysterious duo back in the studio to contnue the process proved to be easier said than done, as Jeff Jank later would recall - "The process of getting them back to work took most of 2003, and the very last parts of the album were much harder [to get done] than everything else" (Jank, 2011, Egotripland).

Despite frustrations, things did move along with Dumile and Jackson once again in the studio, with DOOM re-recording every single one of his original vocal takes. Lyrically his verses were the same (save for some minor tweaks) but he now opted for a less energetic performance, adding a more inhebriated raspy flow which worked wonders with 'Lib's heavily blunted, low end heavy, jazz bap beats. Besides re-recording all the already laid down vocal tracks, Madlib and DOOM also recorded a handful of new songs - "Accordion", "Raid" "Strange Ways" and "Rhinestone Cowboy" - the two latter based on beats created by 'Lib on an SP 303 during the aforementioned Brazil trip. 'Lib also invited talented friends and collaborators in Stacy Epps, Wildchild and Medaphoar to add their vocal talents to the album. With the recording of the final song, "Rhinestone Cowboy", (which even cleverly adresses the early leak and bootlegging) and a cinematic juxtaposition of obscure villainous movie clips gathered by DOOM and hooked up by The Mad Kid. And with that, the i's were dotted and the t's were crossed, and since 2004 Madvillain's "Madvillainy" has set the benchmark for a whole generation of free playing hip-hop musicians and listeners. More than ten years has passed since its initial release on Stones Throw, and the LP sounds just as powerful and groundbreaking today as it did on March 24, 2014. Hopefully one day we will se a proper follow-up to Madvillain, but in the meantime check out the original rare demo tape below. As it is not available for purchase anywhere as of now I just want this to be heard (it however actually was given an official release on a professional pressed up cassette - as part of the expensive, but now out of print, "Madvillainy 2 - The Remix" box). Note that many rips of this demo clumpsily inserts a 1998 demo of Madlib's "Infinity" song, which I have obviously deleted from the tracklist. ENJOY! 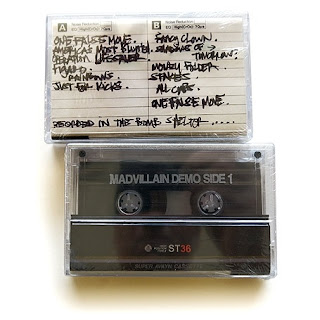 MADVILLAIN - "DEMO TAPE"
Posted by lost.tapes.claaa7@gmail.com at 9:58 AM