[Stream] SILENT SOMEONE - "I Have A Company"

From time to time you stumble upon an utterly dope underground release whose existence you didn't have a clue about. Such is the case with Bronx producer Silent Someone who I'm slightly acquainted wit through two excellent remixes he did for Soundsci, a powerhouse quintet that readers of this blog knows I have supported almost since day #1 and who is steadily building up one of the most impressive back catalouges any of this type of throwback hip-hop group has been able to produce. Beside four to five excelent group records (LP:s and EPs), Oxygen has released plenty of dope 12"s, EP:s and various guest spots, Audessey released one of the best albums of 2014 with producer A Kat Called Fritz and on the 9th of this month UGeorge is releasing a mindblowingly smooth, soulful yet boom banging LP called "The Many Faces Of U-George" (get ready for a review very soon). When recently talking to Jonny Cuba, one half of 'Sci's production team The Herbalizer, he put me on to a very smooth vintage hip-hop LP by producer Silent Someone (who previously has remixed two Soundsci joints for an official 7" and has provided some choice cuts for the aforementioned UGeorge LP). It turns out that Silent Someone dropped a full length album over a year ago that really flew under my radar, and I'm sure a lot of other heads. 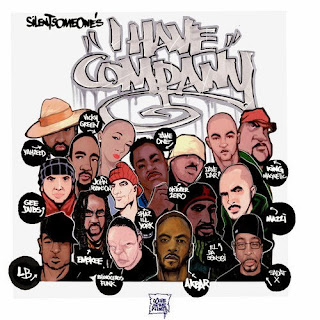 Titled "I Have A Company" Silent gets busy on the MPC, killing the turntables, and expertly chopping some rare but vintage funk, soul and jazz samples to create that true hip-hop vibe. Cuba even went as far as calling it his favorite album of 2014 so be sure to give it a chance. While Silent stands for all production and cuts, vocal parts are assembled from everyone from Sadat X, John Robinson, Akbar, El Da Sensei, Shaz IllYork, Tame One, Dave Dar, and more. Press play via PeasantPodum's Bandcamp where you can also download the seventeen track project in your digital format of choice for 10 USD.