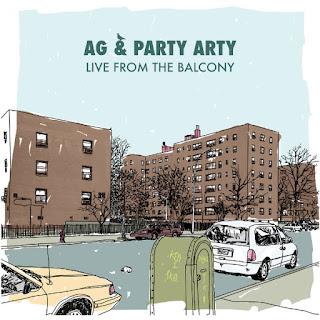 D.I.T.C. camp is on FIRE right now - we haven't had this much Diggin' projects lined up in years. This atonal piano banger called "Gimme The Mic" is dominated by AG's usual smooth punchlines and similies while the late Party Arty adds adlibs and a vaulted hype verse. Ray West does a great job with this joint as he was been accustomed too by now. Apparantly this is from an ucpoming album from the duo called "Live From The Balcony", set off by an OC track, and followed by eight additional songs shared between Party Arty and AG, all set to the tones of Ray West.

And of course in case you have missed it, AG, OC, Fat Joe, Showbiz and the guys have actually spent the last year in the new D.I.T.C. Studos (following the demolition of the old D&D) recordig a brand new abum - the first proper release from the crew since "Worldwide" in early 2000. I'm gonna wait to listen til' the full project is available but you can stream a good 19 minutes sampler and several singles over at their Soundcloud page. The physical project will be available to purchase from D.I.T.C.'s own website along with some nice hoodies and stuff - check it out.
Posted by lost.tapes.claaa7@gmail.com at 11:00 AM