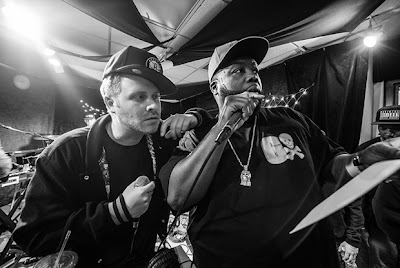 Letting the world famous Def Jux maestro produce the entirety of the southern emcee's recent album "R.A.P. Music" couldd really have gone either way considering their equally distinctive sound.. Luckily it was pretty damnn awesome, and have been spun plenntly since it was released.. I'd even go as far as saying that, tied with the jazz fusion project "High Water Music" with the jazz-sextet Blue Series Continuum, that "R.A.P." is El-Producto's finest work since 2001's "The Cold Vein" for Can O.

With that being said, I'm pleased that announced that yet another collaboration between the pair has surfaced, entitled "Banana Clipper". It's just a snippet for now (though a 1:30 at that), which points it to be a forthcoming single from a second collaboration between P and The Killer. Can't wait, because this is sounding FAT. If that's the case, then one important ddifference is that El-P will also share mic uties with Mike... Can't front on that ("Cancer 4 Cure" was to me, El's finest lyrical output yet so he's still improving, despite being a very compotent rhymer from the onset).

Posted by lost.tapes.claaa7@gmail.com at 1:44 AM