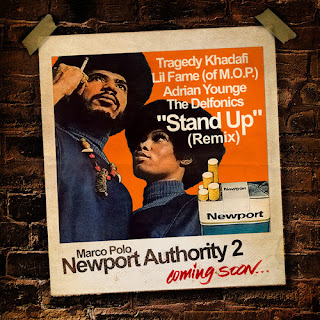 As readers of this and other blogs know a lot of heads feel Marco is one of the illest producers out there right now; he's one of the last producers with some success that'll never forgot his roots while always having amazing guest artists on all his project. "Port Authority" , his official debut from 2007, truly certified him in the game as an outstanding artist, partly due to the amazing set of guest artists he managed to get together for the project. Now the Canadian beat maestro is gearing up for the second installment in that series, but first he's releasing a mixtape of songs that didn't make the final cut for one reason or another. "Newport Authority" is the prequel tape that will be released very soon and we already heard brilliant joints by the likes of Rakim, and The Artifacts. It's hard not to get the impression that, between these two releases, this is going to have the finest guest spots in one place since Pete Rock's "Soul Survivor". For the latest single, the remix of "Stand Up", you got two of my favorite emcees all categories go at it with no lesser legends than The Delphonics and super talented but still rising Adrian Younge!