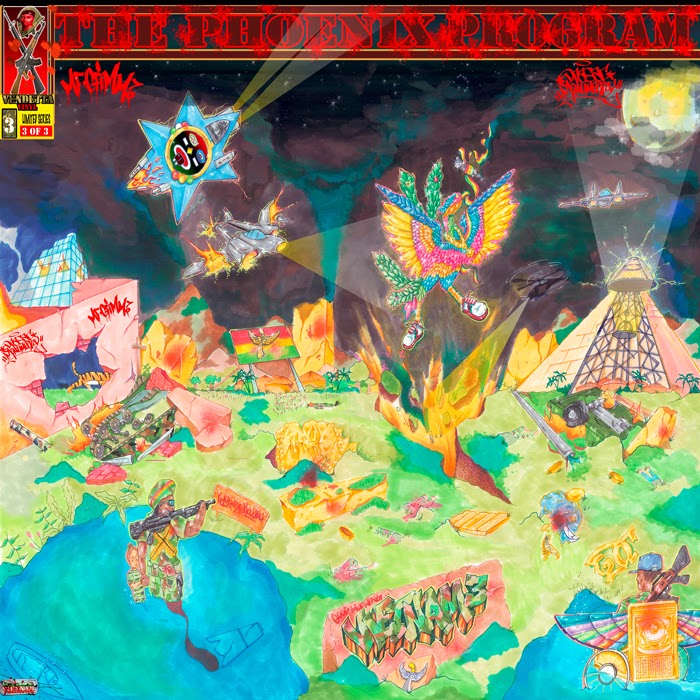 With thirteen tracks clocking in at roughly forty minutes, I would consider "Good Morning Vietnam III: The Phoenix Program" as a full-length album, at the same time as its the third installment in the series. And as much as I loved the two predecessesors, "The Phoenix Program" is another one of the best albums of 2010s standing on its own but it's when listening to all three EP:s/mini albums as a unit that's the truly incredible ride. With that being said the new Grimm/Drasar project stands both as an excellent release in its own right, as well as being the crowning release of the aforementioned trilogy. Taken as a whole I'd udoubtedly go as far as to say that the well-crafted trilogy stands as the finest project of this deacade so far. As familiar I am with MF Grimm, before I came across the first installment of these projects I had never heard the name Drasar Monumental, but as soon as I let the the needle hit the wax I was immediatly taken back by the rawness and boom baptic sound collages and how well they transpired to Grimm's writing and performances throughout. There's no question that the chemistry is nothing short of AMAZING. And as it was a concept album breaking down the horrors of the Vietnam war and mirroring it with the struggles of America today, The second volume "The Golden Triangle" was even stronger, as the chemistry had evolved into something even more natural ad Grimm's conceptual writing and deliveries had became even stronger while Drasar's production had grown even stronger and the way they know where complimenting each other styles started to grow closer to the best known hip-hop duo's of all time (Gang Starr, Pete Rock & CL Smooth, DIamond Distict, and so on)..

So how does the third and final part of "GMV", subtitled "The Phoenix Program", stack up against the two previous releases that both made it to the top of my best albums in their respective release dates. It's always a gamble for an artist following up  a masterpiece with a sequel, as it's very hard to be able to top the original 15 years larer - as we knw there's plenty of subpar sequels in the world of hip hop. Luckily for all of us, a sub-par follow-up from this duo is a far cry from the truth as it's another purely excellent outing from GRIMM & Drasar and it's evident that they've worked real hard to make sure that fans will get nothing but the pure, unadulteraded hip-hop,with a lot of classic breakbeats and strong street lyrics,  that balances the grooves between classic '90a hardcore bap while still keeping it completely original. The songs on here (all versions of the album only include two long tracks - making the statement that this is something you should listen to from front-to-back. But more fresh and original is the way it is produced and performed - the Vietnam war, like any war was messy, paranoid and filled with emotions, and music, And the music Drasar and MF Grimm cooks up for this 40 minutes outing bring back memories of the last days of the '60's and '70s. .Musically it's concocted from a wide range of samples often listed from '60s and '70s records, mixed in with agressively classic hip-hop samples freom trhe likes of KRS-One. The production style is something out of the ordinary, you won't get any of the repetitive four bars loops over a fu ll song anywhere on this release. Instead Drasar creates a bombastic, EXPLPOSIVE sound collage of intensely mindblowing hardcore piecees, whixh really bring the best out of Cap. The huger amount of beat switches and musical switches just shouldn't work but it sure as hell does all the way. There's really only one song that I'm not crazy about, the laid back cut "SOMETHING SOMETHING", which is not a bad song by any means but compared to the other tracks on the project it's a bit of a let down. But that's a minor complaint for an album this is exttremely dope.

When I interviewed MF Grimm and Drasar I told Grimm how I've been following his career for years but feel that the two "Good Morning Vietnam" projects for me represented his best work yet. He completely agreed with me, and listening to either volume of this series (or all of them as a unit) it's clear that he for one of the first time in his life has found a musical compadre that listens to him and truly brings the best out of him. MF Grimm is by far one of the illest, most thought provoking emcees around and his voice is just on another level, and while I pretty much like all of his previous albums (as he's always been pushing the envelope with every single release of him), no previous LP has grabbed me in the way this trilogy has done. From start to finish he follow the concept of "showing different aspects of the Vietnam war" to a Tee, and much of his writing is as cinematic as it gets. Add to that the many scary interludes from real life war criminals like Henry Kissinger - another song that deserves a lot of props for its writing, not being scared of calling out one of the worst human beings in recent history. It's hard to pick favorites from this album considering it's such a cohessive whole and since I'm still waiting for my physical copies I have mostly played it through my phone in tthe two track version, meaning I don't really know the titles of the song. But that doesn't really matter, as this is definitely an album you put on, press play, close your eyes to and move into the hip-hop version of Vietnam this is a trilogy project that at least I will never forgot. Like I said it's hard for me to pinpoint favorite tracks as this is really something I want to hear from front-to-back, but the first single "Glaciers Of Icex" is simply out of this world, and so is the opening "Birth Of Violence", or the agressive KRS-One sampling "Economics"). With that said I really hope that we will get a whole lot more material from Drasar & MF Grimm as a duo. Be sure to head over to VendettaVinylVietnam to order your copy of "GMV III: The Phoenix Program" on CD or LP, or in the exclusive bundle package containing all three installments in case you missed it. Thanks a lot to Vendetta Vintl and be sure to grab all three versions oif the album at the very last. TURN IT UP!!!
Posted by lost.tapes.claaa7@gmail.com at 9:01 AM