[Throwback] KILLAH PRIEST - "A Prelude To The Offering" (2xCD) 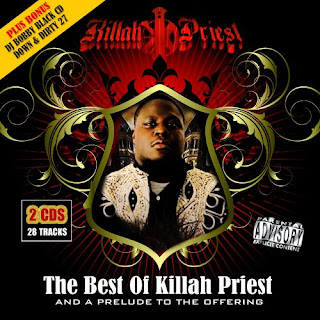 As big of a Wu-Tang fan that I am, I must admit that, although I absolutely adore "Heavy Mental" as one of the greatest, most creative and original musical works of the last 25 years I more or less lost interest in him following "A View From Masada", and was barely checking his material for the following six years. But then something happened, both the underground and Wu-Tang fanatics started whispering about a monumental comeback on Priest's part - an upcoming album called "The Offering" which Priest promised would be a classic album, and judging by the singles, freestyles and loosies he kept churning out during the two year build up Priest showed that he clearly meant business. And then of course when "The Offering" finally came in 2006, it was just as terrific as I had hoped and then some.. For me it's in that rare league of albums that I hold among the 20 best discs to be releaed since 2005 (other works include Freddie Gibbs "Pinata", Raekwon's "Cuban Linx II" (if just slightly modified), Kendrick Lamar's both LP:s, KanYe's "Beautiful Dark Twisted Fantasy", Ghost's "Fishscale", Nas' "Life is Good", Evidence's "Cats & Dogs", and so on... Matter of fact Killah Priest is up there twice with "Psychic World Of Walter Reed" as well).

"The Offering" put Killah Priest back in the position as one of the most cinematic and poetic storytellers of our generation, and his rhyme schemes are constantly excellent. For me he is without a doubt a top 10 emcee, and not only is he a master of his craft but given the right time he is also a master of putting together real songs and construct proper albums that should be enjoyed from front-to-back. "The Offering" is all that and then some - it has the heavily mysticism, religious ambiguity, hood tales, personal biographical stories, fierce guest apperances and posse cuts and superb production supplied mosty by, at the time, relative new-comers collectively known as Godz Wrath. The first single was the title song and right from the jump I knew this album was going to be something really special. Take for example the first single of "View From Masada", which was a track called "Whut Part Of The Game..." featuring Ras Kass - a banger in its own right, but hardly represent of the Priest we had come to known and love from his masterpiece of a deut (an album that was once crowned The Best Hip Hop album of all time in an editorial in Hip Hop Connection back in like 2002 when I was still buying magazines).


I think I told y'all before that I never been much for the art of the mixtape that is such a prominent part of this hip-hop culture we all love and cherish. I dislik the fact that there's rarely full songs, whatever exclusives are on there are hidden between records I already have in way better quality on their original album, and that's not even mentioning the often lame transitions from songs and DJ shouts (some DJ:s really DO get it right though, and those mixtapes are often incredible). But to cut to the chase I found an extremely cheap, used, copy of a Killah Priest release called "A Prelude to the Offering" a week or two ago, and for the reasons I stated above I hadn't actually heard this mindblowing release beforehand although I of course remember its release and it making some buzz on the Wu forums. Now searching on Discogs it turns out that there are actually two versions of this mixtape - one mixed by the talented DJ J-Ronin and featuring a hopscotch of new and old material, including tracks like "4th Chamber", "B.I.B.L.E." and "America" blended with new or unreleased cuts. This is the type of mixtape I don't care for; however, the version I have is spread out over a double CD, getting rid of all the previously released material (or at the very least disposing of the very well known cuts like the aforementioned joints). The two discs features 13 songs each with the first one being called "A Prelude To The Offering" and the second "The Best Of Killah Priest", however the second disc at one point has a female introduction stating "You are now listening to the sounds of "A Prelude..." so it's really one and the same, something also the tracklist confirms.


Needless to say I was absolutely blown away by this release - as a build-up to the album it works tremendously well as it will have your mouth salivating for more due to the fact that it showcases Priest reclaiming his spot as one of the more interesting emcees around. Of course it's not better than "The Offering" but as an album I place it above all three of the discs he released between "Heavy Mental" and "Offering" (four if you cound that "Black August Revisited" project). The thirteen tracks on Disc 1 are more or less all exclusive for the time it was released and here the DJ lets more or less the full songs of each cut play out from beginning to end. It's clear that the majority of the tracks were songs recorded for "The Offering" but left off due to the fact that Priest had so much material already and wanted to make a cohessive project - this doesn't mean that thhe majority of them are inferior to the ones on the album. For example, I was suprised to see "Hood Nursery" and "4 Tomorrow" on here - songs that would later appear on the album's official sequel "Behind The Stained Glass". Speaking of that, there is a beautiful, very atmospheric song with INTENSE lyrics on here with that title that I believe was meant as an "Offering" inclusion as Priest urges the listener to look at the album cover and try to envision what's behind the stained glass (if you have seen the cover to "Offering" you'll know what he's getting at). Most of the beats are original, though there are some freestyles set over other tracks (including Busta's "Touch It" and KanYe's "Big Brother) and a beautiful track like the somber, accoustic guitar monster called "Lost Generation" sounds like Priest basically put on an old instrumental and straight up rhymed to it - very effective. 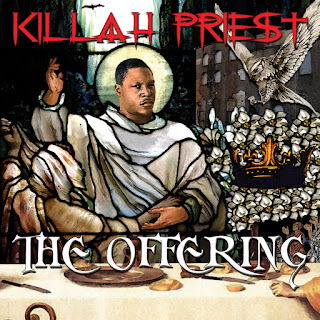 Between the two discs a couple of gems would later appear on "The Offering" - the immaculate "Uprisign", a way too short track that I can probably count on how many fingers the times that I'd not rewinded it at least once. The other banger is the hardcore guerilla attack known as "Stand Still" with Immortal Tech and Poison Pen. The only other songs previusly released (aside from a small amount of guest apperances) comes in the form of the Main Flow collaboration "The Rain", which appeared on the weird "album" or compilation "Black August Revistied" and the song "Black August" which serves as the intro to remarkable effect. Both very good tracks, and especially the latter manages to do what Priest failed to do on the "Masada" LP - adapt hs flow to a more trending one at the time over some bouncey drums, yet the backdrop is as soulful as soulful can be and they talk about some real shit (especially Dontés verse is particulary strong). Other highlights include the amazing collaboration with Nas on "Crime Cardinals" (the original "The Saints" with an even stronger KP verse - "the day Escobar die it snowed cocaine, so let's BLOW smoke"; the triumphant return of Shabaam Sahdeeq who joins forces with Priest and Hell Razah on the soothing, yet heartfelt "On The Way To The Top"; and of course the Just Blaze produced "Masada" outtake "Last Fall Of Solomon" which once again shows that few can construct rhymes as cinematic as Walter Reed.

If you're a fan of Killah Priest you owed it to yourself to listen to this, take my word for it - many of these songs are so good you realize that Priest must have had a hell of a hard time cutting down "The Offering" to its 16 tracks. Grab it from DatPiff below and TURN IT UP!!