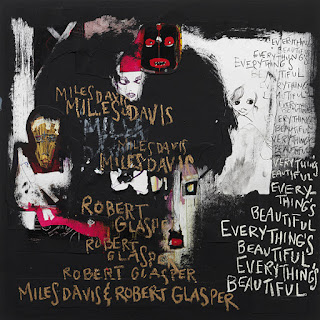 I've been a huge fan of Miles Davis for about 10 years now but for the last year or so I've been on a trip like crazy; almost exclusivey listenig to him (or at least jazz, but more Miles than any other jazz artist), which is why The Lost Tapes has been sort of lacking lately. I've been buying rare box sets, buying his regular albums and pretty much listening to everything he recorded between 1945 and 1991 until my collection now contains about 120 CD:s. Without a doubt Miles was the king of Jazz, but that word was also something he absoutely despised meaning that it was a white-man's word trying to box in black people and their music into. Sure at one time he played BeBop with Charlie Parker, Hardbop with Coltrane and his first great quintet before basically throwing out the rule book and abandoning chord changes in favor of modal transitions with his so called second great quintet (with Hancock, Tony Williams, Ron Carter and Wayne Shorter). But it was from 1968 to 1975 that he discouraged his old school fans by leaving what people had come to expect from jazz artist when he started incorporating electronic instruments, playing top-notch jazz solos over heavy bass vamp more influencced by Sly Stone, George Clinton and Hendrix than by Dexter Gordon. The music from this period STILL sounds ahead of his time. Don't believe me? Pop in "Agharta" or "Pangaea" in your disc player, or "On the Corner" and "Get Up With It" and marvel how ahead of time this cat was already back then. This period (1968-1975) is mostly the era that Glasper has focused his sampling techniques on in building a new album from so it doesn't hurt to be aware of the original LP:s, although it does stand on its own legs as a legit album as well.

But first a word on jazz in the 2000s - is it dead, or does it just smell funny to quote Frank Zappa? As a hardcore jazz fanatic, Robert Glasper is one of the few artists I feel actually has something new to conribute to the genre and keeps it alive. From his accoustic trio piano recordngs on Blue Note to his fusion records with his Experiment band there has always been powerful and original music there (can't forget his excellent contributions to records by Q-Tip and Yasiin Bey amongst others either). There's a few others as well; I was extremely fond and proud of Kamasi Washington's "The Epic", an ablum that I feel can match the great explorative classics of the late '60s and early '70s. Of course both Glasper, Kamasi Washington, as well as bassist Thundercat, alternative producer Flying Lotus, saxophonist Terrence Martin, trumpet player Josef Leimberg,  played a large part in the creation of 2015's best album, Kendrick Lamar's "To Pimp A Butterfly". And also read this great article about the album and it's heavy jazz and hip-hop fusion and why it works so well. Again, huge props to Kendrick for daring to make a modern jazz/funk album in 2015.

So not with that out of the way, let's get back to "Everything's Beautiful", a phrase spoken by Miles during a previously unhead session chatter. Glasper was given access to Columbia's original unedited tapes from Miles' 50's, '60's and '70's session, but unlike the similiar deal Madlib received from Blue Note for his brilliant LP "Shades Of Blue" this is not a remix album per se at all. Instead Glasper has created an original album heavily built around Miles samples that might work best as an homage to one of his musical heroes. And as such it mostly does it's job really well. To be honest, I was slightly intimitated to listen to this project at firstconsidrering my enormous respect for Miles and his legacy, and though I'm a big fan of Glasper I must admit I was a bit worried how it all was going to work out. After all there's been a few shitty Davis remix EP:s over the years (and I'm not talking about Bill Laswell's joint). Luckily, I needed not to worry at all - for the most part this is an excellent homage that I think Miles, who was always with the new black/"hip" involvements in music, would truly like.

The project came to fruition as director/producer of the "Miles Ahead" movie, Don Cheadle, asked for Glasper's services in laying down the score for the film which was soon to be released. The jazz pianist and producer, being a fan of the man for years, didn't hesitate but once the score was finished he felt unfulfilled - hence the concept for "Everything's Beautiful" was born. It's billed as a collaboration between Glasper and Miles, which is certainly is not. As I said before it's more of an homage; in an interview Glasper talked about his vision for the proejct was to sample various parts of Miles and build tracks around that - and we're not talking about his unmistakable trumpet sound, in fact there's only one or two songs that actually make use of that beautiful trumpet sound. Many tracks are simply jazzy hip-hop that might sample Miles voice from unreleased studio rehearsals, others might be built around a sample from one of his sidemen's performance on a classic Miles record as is the case of the beautiful "Violets" (featuring an amazing performance by Phonte) who makes use of a Bill Evan's piano sample from "Blue in Green" (1958). Still this is not a put down, because the album is actually very good although with it's multiple guest and little Miles it feels more like another "Black Radio" LP, which is not a bad thing as it's just as good as it's two predecessors. If not even slightly better - the spirit of Miles has that power.

To me, this is an album that you can play from front to back but my favorite joints is the introduction "Talking Shit" which goes into "Ghetto Walking". They are connected as the intro features the Miles part of the rehearsal of the excellent "Ghetto Walking" (recorded for "In A Silent Way"; considered for "On The Corner"; but ultimately not released until 2001 on "The Complete In A Silent Way Sessions"). One of the most revealing lines here is how Miles tell his drummer (Joe Chambers) to play “some kind of pulse that goes on all the time, that doesn’t sound like ‘ting-ta-ting’” — a disparaging nod to a swinging ride cymbal pattern — in favor of a loop that “doesn’t break, and it doesn’t sound corny.” Already back then he was looking for a hip-hop type of beat, something he woul continue exploring on "On The Coner" (1972) and to full effect on "Doo Bop" with Easy Mo Bee right before his death. Therefore it sounds great when Glasper, who's acting much more like a producer than as a pianist on this LP, adds a banging hip-hop drum pattern to the original "Ghetto Walkin'" music and it sounds blazing hot - especially with an excellent performance by Bilal over the music. Speaking of singers, Miles always made instrumental music for 99% of his career but "Everything's Beautiful" features a wide array of singers and rappers like Illa J, Erykah Badu, Phonte (who I once again must give props for his amazing performance here), Georgia Anne Muldrow and even Stevie Wonder turns up to give his respect on the beautiful album closer "Right On Brotha". The only one who actually played in one of Miles' bands on both stage and is guitarist John Scofield thouh he is left with one of the weaker tracks which feels like a missed opportunity.


Without a doubt the best song on the album is "Mayisha", one of Miles' last songs before his semi-retirement in 1975. Glasper's production and sample library of the original master tapes captures the essence of the track without making a carbon-copy of the track in question. Add to that the beautiful vocals of Erykah Badu and most importantly she actually gets a chance to duet with Miles wah-wah infused trumpet, and it sounds like they were in the studio together laying it down together. I'm sure Miles would've loved Erykah and would be proud of this joint. Even Glasper comes out from his proudcer chair to lay down a little solo. This is terrific music and would work as a great introduction to any of the three artists for the uninitated. The Georgia Anne Muldrow / Glasper rendition of "Milestones" is pretty damn fly too to say the least.

It's not a perfect album by any means, but when you got the name Miles Davis in the title and marketing promotion you have uneccessary pressure on you. I might have loved it had been released a simply a Robert Glasper album because I have really liked his output so far and this is no exception. So buy it, but don't expect a Miles Davis album, but as a Robert Glasper it's probably a 4/5 album. But with the presentation as a joint collaboration I can't give it much more than 3/5; 3.5/5 absolute tops. But it's the music that counts, right, so I'd still recommend it but I stand by that it was a bad marketing move. You can stream the album via Spotify below to make up your own mind. If you dig it as much as I do - purchase a copy on iTunes or Amazon.