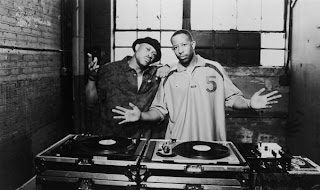 Now this is some unexpected but funny shit right here, a connection between the worlds of hardcore hip-hop and mainstream hip-hop by two of the leading artists of the respective genres. This DJ Premier remix has actually been talked about alot on the net during the years, becoming a myth that many doubted even existed. Madonna released her single, "Don't Tell Me" sometime in 2000 and Premier supplied her with two remixes for the single. It seems she couldn't handle the realness and dismissed both versions, and now in 2011 one of them surfaces through a radio rip of Preemo himself playing it on his show. Shouts to Gim @ the DJ Premier site, it's always fun to hear some different shit like this. Head over to Gim's site to hear a radio rip of Jeru The Damaja's original Hot 97 intro using the "10 Crack Commandments" beat which is how Biggie heard it in the first place. In addition, don't forget to check out "The Soul Of Preemo"   a compilation I made of Premier's R&B and soul remixes/productions.