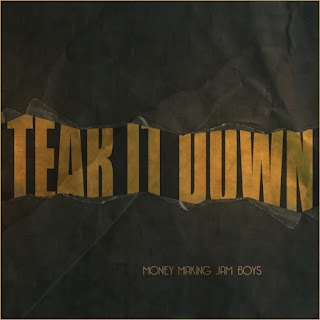 The Money Making Jam Boys are a group consisting of lead MC Black Thought and several lesser known rappers that we've gotten to know through guest spots on various The Roots project; Dice Raw, STS, P.O.R.N. and Truck North. These guys have worked on a project together for a while now and although several BTS videos and such has surfaced this is the lead-off single from an upcoming mixtape hopefully dropping sooner than later. This record is produced by Khari Mateen who previously worked with Black Thought on The Roots tracks such as "Clock With No Hands", "Game Theory" and "Criminal". Link courtesy of @ 2dopeboyz.com.
MONEY MAKING JAM BOYS - "Tear It Down"
Posted by lost.tapes.claaa7@gmail.com at 12:11 PM