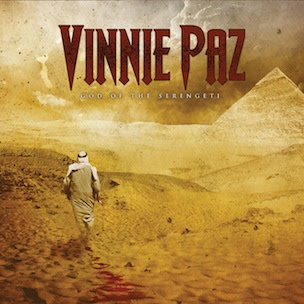 Vinnie Paz returns with another solo album this year, titled "God Of The Serengeti" and set for a October 23 release through Enemy Soil Records. Since the relationship between him and Stoupe soured, I think they should put Jedi Mind Tricks on ice and strictly focus on solo material; a task Vinnie Paz proved more than fit fot, as seen by the previous "Season Of The Assassin". His sophhomore LP packs a similiar high caliber list of guests and producers that will guarantee this being pure heat, something which was also revealed by the first single "Cheesesteaks". Peep the tracklist below, and grab the new single featuring Tragedy Khadafi on guest vocals and production work from Beatnick Dee.