Saigon's "The Greatest Story Never Told" was a fantastic album that I still play on a semi-regular basis. His follow-up "GSNT: Bread & Circuses" was quite the dissapointment, save for a few songs, however. Luckily his mixtape game has proved that he hasn't fallen off and is still making interesting music. In fact boom bap maestro DJ Premier will supply no less than four beats and production for Sai's upcoming third installment in the trilogy. "GSNT 3: The Troubled Times of Brian Carenard" drops on September 30 on CD and in digital format, and judging by the tracklist it looks sick. We previously heard the first single "Nunya", and now new single "Mechanical Animals" is here. The idea behind the record is getting representatives for the '80s (G Rap), '90s (Memphis Bleek), '00s (Saigon) and 2010's (Lil Bibby) come together and rock as a unit like it's nothing. I like that idea and the result is ill. Check out the tracklist below, press play and let that volume PUMP. 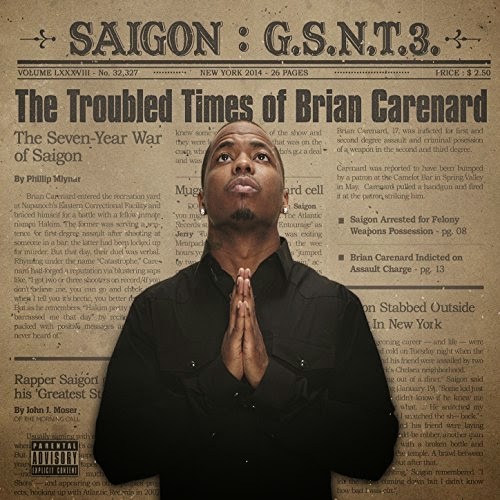