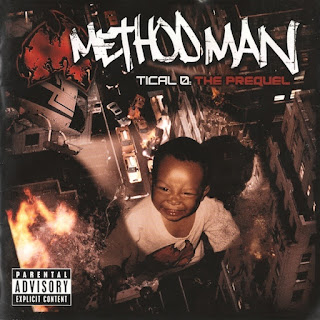 With Method Man's first album in almost 10 years just around the corner with "Meth Lab", lets take a look back at what is often described amongst hardcore Wu-Tang fans as one of the straight up wack releases from an official Clan member ever released. So what the hell went wrong? Both "Tical" (1994), "T2: Judgement Day" (1998) [extremely underrated album] and his first collabo with Redman on "Blackout!" (1999) was at the very least solid projects that gave Wu fans that grimey shit of what they wanted and expected from the one member of Wu-Tang Clan who already from the first single was designed to be its number 1 face outwards due to his slamming solo single that was even titled after his name. Funny thing is that due to some less stellar Wu solos and albums and an interest in the backpack / underground movement of El-P, Cannibal Ox, Mr. Lif, Mr. Len, Chubb Rock, and so on I stopped checking for Wu around 2001 after "Bulletproof Wallets" and "Iron Flag" - two albums that I have since reevaluated. Anyway fast forward to late 2004, and a real good friend had received a free cassette of J-Love's "A Taste Of Tical 0: The Prequel Part II" which he gave me and I was blown away by how dope this shit was and how much of these songs I had missed out on (remember this was a bit before the internet truly blew up and I hadn't checked for Wu for a few years, so I was thinking these hardcore gems was from the album it was promoting). After several spins I found myself in a record store picking up the actual album, thinking well at least Method Man never dissapoints so this will b interesting to hear at the very least. Who could have known... 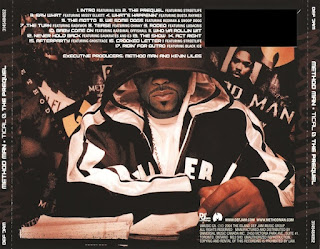 Before we even get into the music, let's take a look at the cover. This cheesy Photoshop hack job is downright embarassing and at the same time playing on the over used hip-hop cliché of the artists showing themeselves as young kids not knowing they would become superstars. At least the back cover with Meth writing in his diary looks ill as hell and should have been used as the front cover, plain and simple! So on to the music - is this album rightfully hated or is it just so dissapointing that it has deserved an unfair rep as a totally horrible album. Well, given that Method Man is a superstar that can do so much better I'd say it's something in between. And while it is Meth's own fault and his poor judgement not understanding how to please his fans, he afterwards has blamed Puff Daddy's involvement in the albums creation as the LP:s A&R - well who hired Diddy in the first place Meth? And Diddy is responsible for countless classic albums but Wu and Bad Boy don't mix like two dicks, and that's just the bottom line. While there are stand out tracks on the album, the tracks produced by Daddy's Hitmen are generally the low points of the album save for the excellent "The Motto" which was produced by the always trustworthy Nashiem Myrick, who produced a lot of classics for B.I.G. This is the sound they should have gone with, so why the hell not enlist Carlos Broady and Nashiem Myrick more and this album could have been fucking great?!

Another thing that made the album fail big time is how Kevin Liles and Sean Combs vetoed against RZA's involvement in the album. What the hell? RZA made Meth's career, he produced the single that made Meth sell double platinum on his debut. Apparantly RZA and Meth had been in the studio recording and completing no less than seven records, but at the end only one song made the actual tracklist. Is it a coincidence that it happens to be the best song of the album ("The Turn" featuring Raekwon?). Even great producers like No I.D. who the same year supplied two absolutely amazing joints for Ghost's "Pretty Toney" album on the same label. It's quite easy to see that the A&R:s and execs asked No I.D. for a generic beat that could work in the club and the result was the abonimation that is "Tease". It's a shame because I love Meth's flow and I love No ID's production and that this is the only collabo we are left with between the two is just a sad state of affairs. Another thing that really bugs me about the album is that they cut away Wu-Tang features that would've been a great selling point to us hardcore heads. LA The Darkman was featured on the excellent RZA production "That Thang" while Ol' Dirty Bastard provided a banging hook on the song "Who You Rollin' With" which was mysteriously absent from the retail version.

Still "Tical 0: The Prequel" got it's moments, though they are few and far between. It would make for a dope EP, the main single with Busta, "What's Happenin'" always get me hyped as hell, I like the title track, I like "The Show", I love "The Afterparty" with Ghostface and as I mentioned above "The Turn" with Rae and RZA is a bonafide Wu classic. Still giving Meth's statue as one of the true greats, this album deserves all the hate and ridicule it has come across. Check out the "That Thang" track with Darkman below and the ODB original version of "Who Ya Rollin' With" and add those to the tracks mentioned in this paragraph and you got a nice lil' EP. Let's hope "The Meth Lab" will provide us with that real heat! Big shout out to CL2Coming for the rare 192 kbps album rip of the rare ODB version of this joint and the J-Love version of "This Thing". You'll also find "Take The Heat", Meth's collaboration with Dr. Dre recorded for the album, it's decent but given the high profile collabo I'm suprised they ditch this. Download all of them below.