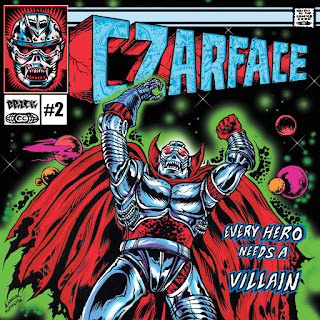 Yesterday Get On Down Records released the sophomore album by Czarface, the trio made up of Wu-Tang Clan's Inspectah Deck and long-time MC/producer duo 7L & Esoteric. In 2013 they dropped their self-titled debut album in February 19, an LP that actually gained a lot of recognition as a great underground record. Personally I really tried to get into that one but beside a few cuts it sounded quite generic to me and was an overall disapointment. In other words I didn't have any hopes
for this follow up called "Every Hero Needs A Villain" but GOD DAMN was I wrong! L7 stepped up his beat game BIG TIME on here (with the help of his protogé and partner Spada4), a perfect fit for Deck, and even Esoteric (whose lyrics sound kind of lame at times) sound deceent on this fifteen track excursion. I would strongly recommend this every time to fans of Wu, 7L & Esoteric and genrally just underground hip-hop. Today the iTunes version was released and this edition includes two bonus tracks that are just as good as anything else found on the LP. I uploaded them both to my Audiomack account for free streaming, no downloads however you can buy the album from iTunes here.

Posted by lost.tapes.claaa7@gmail.com at 2:41 PM