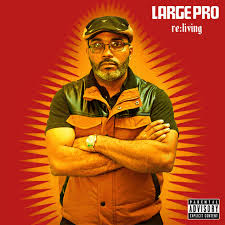 The legendary Large Professor is back again with his sixth solo album (counting the Main Sorce debut), and it sure does not dissapoint as he is one of the few artists that are not afraid to stick to the script, only minimaly change up his sound but never leaving the Golden Age Boom Bap influences behind. Large Pro's last project was fully producing Cormega's excellent "Mega Philosophy", a very short and consice album that didn't leave room for any filler on its 33 minutes play time, and it's clear this is something Large has adapted for "Re:Living". At only eleven songs and a running time of 31 minutes, it is by far his shortest album yet, but at the same time it is also one of his most focused to date.

Kicking off with the title track, it's clear that this is the Large Pro we have been missing and there's no dobut that he's one of the best producers around. Smacking drum programming, a haunting, almost melancholic acoustic piano melody, a recurring chant, a deeply burried horn sample and beautiful cuts all invites Extra-P to drop several quotables that together might very well take you back to the mid '90s. This is how the fuck you open up an album - sucker MC's take note. The following cut is more laid back (but don't think for a second that the drums isn't as hard hitting as ever), and this is one of those joints you need to hang heavily on the lyrics as Large Pro takes it back to his youth, fine storytelling rap for sure and the melodic beat sure does the joint justice. "Opulence" is the next joint, and was one of the singles released prior to the album, and is another laid back joint with hard hitting drums but will catch you in a reflective mood due to Large Pro's lyrics and the addictive piano melody. Once again the drive of this beat coupled with the lyrics will just suck you into the world of this music. Timeless!

There's really no point in going through every song and breaking them down as it is clear that this is a true body of work, and as I pointed out I think this is an inspiration he caught working with Cormega on his latest album. But let me say this, there sure as hell ain't a weak song on this joint, there might be a stand out or two, but this is one of those LP:s that are so rare today where you really give it a front-to-back listen every ocne in a while. Just like he did on his previous LP, "Professor @ Large", I think it's real refreshing that he incorporates two slightly shorter instrumentals on the album ("Earn", "NDN") especially when they work so well in the context.

Through the samples used there's no question that William P. Mitchell (as his real name is) is paying homage to those black musicians who became before him. Through samples, lyrics, and guests we are taken from jazz music, to blues and funk, to hip-hop and into the retro future. It's not a bragadocious album either where Large boasts about he's the only emcee worth talking about (whcih can become very tiresome) - sure almost any good hip-hop album should have at least one joint like that, but here Extra-P even has a beautiful tribute to his long-time friend and musical partner Nas on "In The Scrolls" which also features Wiz from The Bravehearts. Another song of this caliber is the inclusion of "Industry Remix #2", where Large Pro take a step back to let some of the illest legends of all time take the forefront - I'm talking Inspectah Deck, Lord Jamar, Cormega and Roc Marciano who does an excellent job over a dark, brooding instrumental thatmakes the original "Industry" sound almost happy go-lucky. This was originally released as a free download as a bonus track for "Mega Philosophy", but were only uploaded in 128 kbps. Here in CDQ this song sounds so more potent, and is actually a highlight on the entire project.

If I wanted to clutter this review I would write a paragraph or two about every single one of the eleven songs, because there's not a wack song on here so I'ma leave it at that, but be sure to don't sleep on this. I've only heard it a couple of times, but I love how focused it is, how incredible the production and vocals are, and save for "Breaking Atoms" and "The LP" I might go as far as say that this is Large Professor's finest work yet. His work ethic and friendship with Cormega seems to have done him a lot of good! Purchase the album, which is out now, on LP or CD @ UGHH! Don't sleep!
Posted by lost.tapes.claaa7@gmail.com at 4:24 PM