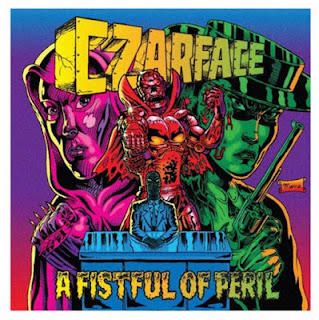 Guys all over have been going nuts over each and every release from the trio that makes up Czarface (7L & Esoteric + the incredible Inspectah Deck). Now, I loved "Speaking Real Words" as much as the next guy and while I nod my head to Czarac two first abums while on ocassion being smacked down by some really slick wordplay, on a whole neither LP has really managed to hold my attenton like that. I can't really pinpoint. So while the internet world was giving off a collective sigh of relief on yesterdays announcement that a new Czarace album was pretty much finished I felt more like "Cool, I will listen to this one or two times  at least". Deck used to be perhaps my favorite straight lyricist of the Wu (note, not artist but lyricist) and he can still master those bars but I don't know I feel the thought of him and 7L & Esoeteric might sound more interesting on paper. But I'm probably just a hater, because their new single is indeed DOPE and I'm eager to see what they have cooked up and I really hope they take me by suprise [although I'm not even a fan of the name, by a long shot, CZARACE?]. But what the hell any new Rebel INS, is good Rebel INS.. Well yeah, for the most part. Come to think of it, Part Two was pretty damn sick.

The group kept the album on the real hush-hush untill they unveiled the second (!) single. The first one, "All In Together Now", was released as a loose promo track but has since been included in the official tracklist (see below). But then yesterday, they seemingly out of nowhere, they dropped the cover, tracklist and another band new single so peep that one as well as it's even iller - Inspectah Deck goes HAM onhere. Followers of the group will notice the chance in approach to this new alubum goes as far as the guest features goes. There's still guests but not of the high caliber of the first two volume and ZERO Wu cameos. But oh well, I'm sure this could very well be a winner.