M.O.P. will always remain one of my favorite groups in Hip Hop, though it's not as often as before that I throw on their testesterone fueled agressive and violent music, but it's no question that is Grade A hardcore Hip Hop and it tranforms back in to a place in my life that "Firing Squad", "Warriorz" and "First Family" was basically the soundtrack of my life. I always defend my guys when some stupid fuck try to claim that Lil' Fame or Billy Danze isn't lyrical emcee and doens't have anyting to say - like WHAT?! Have you heard "Muddy Waters", have you heard Fame's verse on "Suffering", have you heard "Face Off 2K"? But maybe the illest thing about them is how incredible their live shows is, between them and The Roots they are probably the best live act I ever seen. Not only have they more energy than three of your favorite emcees combined, they have a great way of inviting you into their live set. A good case in point is a DJ Premier live set I saw where he was spinning all music he had produced himself, a lot of headnodding and shouts of encouragement, but then he brought out Fizzy and Danze for just two songs and the crowd went FUCKING NUTS. And they have no problems signing autograph, hooking you up with some of their personal whiskey as a fan, giving you a huge and dap and thank you for supportig. Things like that are truly appreciated by fans unlike some of these bigger than lives divas that it's probably better to never meet if you want to keep on ejoying their music. 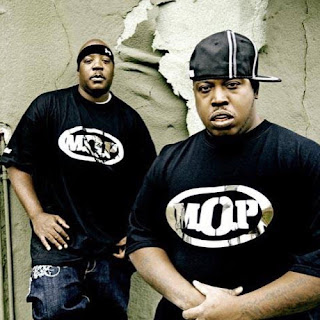 But I'm getting off track here  (it's just that it's been a while since I wrote about M.O.P., one of my all-time faves). We all know that Lil' Fame, while never having released a solo album per se, has dropped plenty of loose tracks and a lot more guest features. Billy Danze on the other hand, has his label and stable of new artists but he's taking more of a manger role there than as a supprorting mcrophone player. Back around 2011 ("The Foundation") there were talks of both Fame and Daze coming ot with solo albums before the next one and there actually was a bunch of Danze solo singles (like the dope "Shell Casings"). In 2016 Danze is back from the shadows with an open letter to The Obama Administration, "6 O'Clock Briefing", producd by Quincey Tones wth visual ques from the patrotic 1970s movie "Patton". Danze is curently in the studio working with more material from (what I guess is an upcoming album) with Doc Ish. I'm fucking with this!

"Some may see this as a song," the Brownsvlle emcee says about his just released single and video. "But it has nothing to do with music, It's my view of whats happening in my country. We talk to each other about the issues affecting our country, we march and protest, but we never ask the president how he feels. Understanding how things work, I say 'we know you did what you had to do'. The president has done his best. But as a man, does he see what's going on in this country?" "6 O'Clock Briefing" is availbe on Danze's We Build Hits imprint.
Posted by lost.tapes.claaa7@gmail.com at 11:23 AM