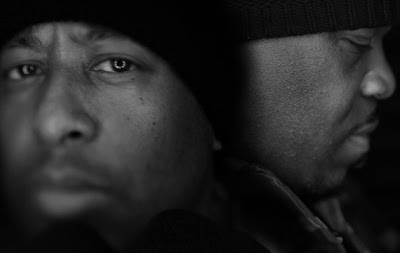 You can't discuss quality New York hip-hop without mentioning the name DJ Premier; the king of D&D Studios (now HeadCQuartrerz) has kept true school hip-hop alive and well since 1989 and has an instantly recognizably sound that just about everybody loves. Whether remixing R&B joints, producing Chrisina Aguilera or lacing LP:s for Group Home or Blaq Poet, Preem is always worth checking for. Some of the hardest, and by that I mean illest, joints in his entire catalouge however is the stuff that he's provided for James Campbell, p.k.a. Freddie Foxxx, now better known as Bumpy Knuckles.

Bumpy is somewhat of an unsung hereo of the rap game; from missing out on the opportunity to team up with Eric B. in 1986, to Flava Unit ultimately shelving both versions of his brillint '94 LP "Crazy Like A Foxxx", it wasn't until he returned more agressive than ever with 2000's "Industry Shakwdown", a full-out assault on the entire music industry, that he finally got the props he so rightfully deserved. An album, that's so powerful in both prouction and rhymes that it remains one of the absolute top releases of the last 15 years. Building up the hype for the album was Foxxx's murderous guest verse on Gang Starr's "The Militia", a verse that will go down in history as one of the best cameos in history. Premier also produced two stand-out cuts on the album, "R.N.S." and "Part Of My Life". This was the beginning of a long-standing relationship that would stretch over Bumpy's and Gang Starr's respective albums and often resulted in the best songs of the respective projects. Premier has often said that he love the most to produce for angry hardcore emcees like M.O.P. and Blaq Poet, so wen news broke that DJ Premier was teaming up with Bumpy for an entire LP worth of material, fans expected nothing less than true school bliss. And, "Kolexxxion" does not dissapoint.

Listeners that expected an album filled with nothing but brand new material migt have found themeselves slightly dissapointed; as the title indiciates, "The Kolexxxion" exists somewhere in the wasteland between a new album and a collection of older material. Had they included songs like "Part of My Life" and "The Militia", then it would have been a problem, but as I see it now, there's really not a problem calling this an original album, as really only one single song has appeared on a previous Bumpy release. A few tracks have been played on the LiveFromHQ Show, which to me is really a positive thing as they finally have found a home in our record collections. Despite being classic tracks, I can't help but feel that including "The Lah", a song released on 12" over ten years ago, and "P.A.I.N.E." which appeared on Freddie Foxxx's "Konexion" LP in 2003 doesn't do the album a favor; especially when considering that there's previously unreleased material that's almost as good ("StoodioTyme", "Inspired by Fire") that could have taken up that space instead. The same goes for the only two average songs on the entire set; the rather pointless "Everebodee" and "FYPAU", the latter which might very well be one of Preem's most boring beats yet.


But let's focus on what this long-awaited collaboration in reality is. And what it is, is 70 minutes of brilliant superior boom bap of the hardest and most agressive variety; music that follows all the "rules" of what true school hip-hop has and should be. Ever since "The Militia", Foxxx and Premier have been the epitome of what rugged New York rap should sound; and "Kolexxxion" is full of that type of violent, slamming music that readers of The Lost Tapes love and cherish. Tracks like "Shake The Room", "The Lah", the full-out assault on bootleggers "We Are @ War" and "P.A.I.N.E." rocks harder than anything in 2012 and is bound to get any club pumped; something I can testify to, as these records all had the crowd going completely insane when the duo performed them live this November. But the real 5/5 record on the first disc is the first single, "B.A.P.", a majestic track with boom baptic drums, trumphant horns, classic Preem cuts, and three Bumpy verses that's so well woven and threatening that sucker emcees might be tempted to hang it up. My only complaint here is why this wasn't used as the album opener; "My Thoughts" is a solid cut, but "B.A.P." would've been on a whole 'nother level as it sets the tone for what the LP is about in both production and lyrics.


The entire 17 tracks 2xLP is never less than fucking dope; Freddie Foxx and DJ Premier and their "Kolexxxion" feels like the closest thing that we're ever gonna get to a new Gang Starr album. Case in point is the jazz-infused homage to the late '90s tours with The Foundation on the powerful "Gang Starr Bus" where Bumpy leaves the agressiveness in favor for some powerful storytelling. Other standouts include the fierce single "More Levels" - a perfect symbiosis between Bumpy's rough hip-hop homage and Preem's cuts and synth- and bassdriven beat. "EyeNeverPutMy4cusAway", which in fact was rejected by KanYe West for his "Dark Twisted Fantasy" LP; another superior tracks, with a hypnotizing horn sample being looped while Bumpy turns in an A+ performance; "I was born a follower who learned to lead/ among low-lifes, shit bags who burn and grieve/ criticize me when you reach my level/ 'Til then, just admire my style of fire" he vividly spits.

There's a lack of guests here, just like back in the days it's an album of one emcee and one DJ doing their thing. Only Nas turn up for a pretty fun verse on the Preemo remix of "Turn Up The Mic", a Freddie Foxxx 12" from 2004. Bumpy's voice is often agressive and the subject matter is often "limited" to despicable sucker emcees, real hip-hop and keeping it real in life and music. This works great over Premier's head-nodding production, but it's fortunate that we get at least two storytelling tracks; the previously mentioned "Gang Starr Bus", and the heartfelt album closer "Word is Bond". It's a dedication to Headcquarterz who passed away in 2005, though it differs from the usual tribute record as Foxxx rhymes from the point of view of Headcquarterz himself for the entire song. If you don't know about Headcquarterz you might not even realize that it is a goodbye to a fallen friend, and as such it's a very clever record and a perfect album closer.


It might not be the best album of the year, but for a true fan of hardbodie New York hip-hop not to put this on their top 5, or at the very least top 10, list would be sheer ignorance. Also make sure to check out the "StOoDiOtYmE" EP, as well as the two bonus tracks "Mic & Gun" and "Undagroondgoon" for more quality music in the same vein. This might very well be the album I've banged the most this year, and seeing it performed live brought another level to an alreay great musical experience. If you're late on picking this up, do so on
Posted by lost.tapes.claaa7@gmail.com at 10:52 AM