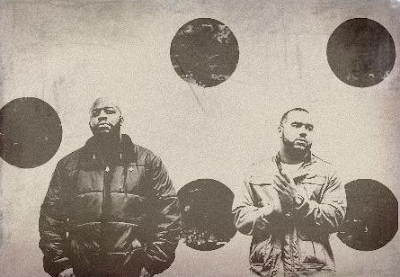 I wasn't sure if I wanted to include "Trophies" òr "Dice Game" in this review, and although OC is maybe my favorite emcee of all time I have to go with the latter; don't get me wrong though, "Trophies" is an amazing LP and you can read my original review here. But I feel that Apollo Brown really came through with his best work since The Left debut here, possibly ever, and Guilty Simpson's performance, who I consider to be one of the illest rhymers doing it right now, sets it apart from his previous projects and makes it his finest LP yet. While I love both "Ode to the Ghetto" and "OJ Simpson", but the lyrical themes and topics here are on another leve. As for the latter Madlib collavo, The Beat Kunducta smoked one too many blunts and fucked up what was very close  brilliant hardcore hip-hop record with 30 minutes of interludes with a very short life-span. A vinyl nightmare if I ever saw one; a picked aparrt CD rip excluding the vast majority of interludes and inserting the 7" only "Friends Only" and the street single "Before the Verdict".
Whereas Guilty on ocassion have gone deep, his subject has not too often strayed away from the macho themes of brutal repurcessions, hip-hop realness, guns, menacing violence whether metaphorical attacks on lesser rappers or those fucking with him or his crew. "Dice Game" shows an extremely mature Guilty, by far his best performance yet; there's still some of those classic elements described avove present which of course is a good thing - but it's whenever he allows himself to become introvertive, reflective and truly deep that the magic really happen. The first song I heard from the project was the single "Truth Be Told"; it blew me away then and still do each and every time. Over Brown's neck powerful drum programming, strings, haunting and ocassional vocal sample and the overall hardcore beautifulness of the whole thing, Guilty turns in an A+ performance that have him relieving his past while eflecting on his younger years, the violence and crimes he commited, the mindstate he was in and explains why he was this way. At the same time, he comes across as a truly changed mind, it's obviouis he's still no one you want to wrong do, but once he turned his life around and focused on his true passion, things changed for the better. It's autobiographical, and it's perfect; a great choice for a first single as it in a sense is the main theme iof the LP. One of the things that I have to give Apollo credit for is how he's constantly re-using very famous samples that been the basis for some of the most recognizable hip-hop classics over the years. This is actually one of the stronger points here, and one that shows that Brown is becoming better and better, woth each project. Hopefully this inniovative idea will shut up all those haters claiming this extraiordinary guy only got one sound. Fellow In fact, fellow Detroit lrgdnd Jay Dee and Frank-N-Dank was once supposed to record an album called "48 HRS" back in 2003 and one of the original ideas for the album was for Jay Dee to produce records using samples of classics like "Juicy" (BIG), and "Streets Know" (Jay-Z). I'm not sure if Apollo Brown was aware of these concept when crafting "Dice Game", but he's definitely using a similiar formula in parts here. What easily could have came off simply as a tired and lesser resentation of the original classics, Apollo instead makes these samples and the record he uses to create from them truly his own.
Already on the powerful opening track, Guilty Simpson gives banging. or should I say powerful, dedication to his hometown of Detroit, representing the good and the bad sides of the Motor City. This all takes place over a rugged beat that hip-hop connisceours definitely will recognize; All the basics of Nashiem Myrick's produced Jay-Z classic "Where I'm From"; the dark, eerie and progressive instrumental main theme, even the ocassional vocal sample, are all there, yet it sounds is completely rejuvenated, coming off as an extremely impressive "remix" which out of these type of the tracks that are the most similiar. The drums are typical Apollo though, and Guilty's homage to his hometown once again mirrors Jigga's 1997 Marcy salute. This is then followed by "Let's Play", which samples no less of a hip-hop masterpiece than Wu-Tang Clan's "C.R.E.A.M.".Luckily, it's not the main sample that is being used, instead Apollo opts for creating a piece around the intro which stretch into the vocal loops, and the ocassional background horn. Guilty sounds right at home here, dealing with groupies; "Let's play, watch me catch her/ she's starting at my crotch like a picture/ waiting for the signal so she can throw it at me, she's nasty..."
Another outstanding example is on the aforementioned "Truth Be Told"; Brown flips one of Masta Ace's more pouplar songs of the last decade, "Good Ol' Love". Unlike "Reputation", Brown's magic here totally transforms the sample, transforming it to a rather different goove than 9th Wonder originally created. Much of the vocal samples are intact, you got the strings and keys, but Apollo often juxtaposes it all over each other at once, while putting his traditional boom bap drums at the forefront. In fact, it took me a few listens before I even realized it was the same Earl Hines sample that Ace had used, despite having listened countless times to The Masta's interpretation. And that is very impressive!

Anothér thing that has to be said about the album is that Guilty and Brown sound damn near perfect together here. The chemistry is one of the year's finest and as is the case with so many MC/producer combinations that have truly suceeded over the years (KRS-One/DJ Premier, Show & A, RZA/ Ghostface, OC/Buckwild, etc.) they allow each other to together become one, bringing out the best of each other. With the possible exception of Show&AG's trio of releases, the power duo that's behind "Dice Game" is the best emcee/producer combination of the year. Apollo delivers true boom bap drums, Guilty's delivery is rough and agressive; yet the slightly disorted soulfulness and extensive use of strings adds an element of tenderness, while Guilty's self-reflecting lyrics together creates an extremely impressive oxymoron that gives the album an edge that sets the album apart while at the same time show both artists variety. Besides the dominating boom bap soul, things does switch up with tracks like "Dear Jane", and especially one of the LP:s finest joints; "Wrong Hand¨" which owes more to an interesting mix of jazzy horns, electronic ´synthesizers, and of course the knocking drums we come to expect from the Detroit production master. There's far from any weak tracks here, lyrically or production-wise; this one you play front-to-back with no skipping. While some of Apollo's earlier material gave the impression that he was still trying to found his sound which resulted in an often repetitive sound.. Hoever, it's clear with his last three LP:s that Brown has finally found the perfect outlet, and one can only hope that the future holds a lot further collaborations between these two gentlemen. There's only two songs on the project which includes guest features, and while "Potates" and "Nasty", which features impressive performances by Torae and Planet Aisa respectively; I can't make up my mind whether if these might have been better off as solo versions while the cameo-laced mixes would be released on a 7" single or something like that. 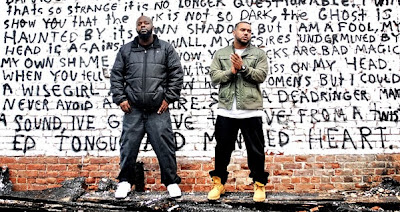 As the reviews the last few days have strictly focused on "The Best of 2012" releases, they are all obviously very positive, but don't believe for a second that I'm not able to criticize artist that i do adore. "Dice Game" is just that good, and if there's one thing I feel I need to complain about is the same thing I mentioned in my review of "Trophies"; some of these tracks are in desperate need for some heavy turntable work, which would add yet another dimension to both albums as several songs really call out for it. For example, the closing track here, where Guily wonders when, where and how he's gonna go out ("How Will I Go?)", which adds a brilliant BIG sample from his sligjtly similiar "Suicidal Thoughts". The sample is repeated as a sort of a hook, but kind of falls flat in this regard since it's just repeated a fewtime; where's DJ Soko when you need him, right? But let's not nitpick, Guilty Simpson and Apollo Brown has made one of the best albums of the year (in fact, Apollo's done two of the best records this year, iincluding the OC collabo). and one that will live on for a long time.. Support real hip-hop and pick it up in your choice of vinyl, CD, or Mp3 ASAP my little droogies, UGHH, iTunes,and Amazon,are jjust a rew retailers caring the LP- Big up to Guilty, Apollo, and everyone involed,
Posted by lost.tapes.claaa7@gmail.com at 3:53 PM