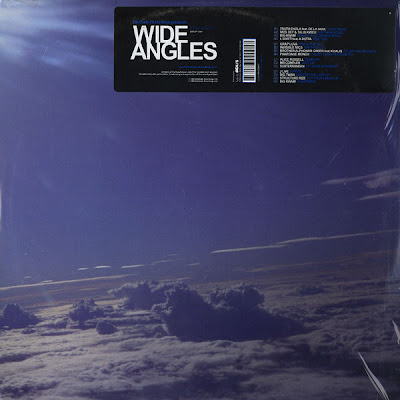 "Wide Angels" was the name of a very dope compilation of some of the finest underground hip-hop available around 1999 for Blind Side Recordings. Released on the 1st of January 2000, the fifteen track collection was an impeccable mix of some of the most potent underground lyricists and producers available at the time. Sporting both somber and aggressive beats and fierce vocal styles, mesmerizing hooks and memorable 16:s, this is a must hear. While I don't have the actual album in my collection yet, my crates pack plenty of records that do appear on the project; in fact "Wide Angles" is about as powerful of a late '90s unerderground hip-hop showcase as Rawkus and their "Lyricist Lounge" and "Soundbombing" series.

I'm not sure if DJ Spinna had anything to do with actually compiling this as it was not released on but his productions and a lot of artists he worked with at the time are all over this. Things kick off with the brilliant "Voicestress" produced by Spinna and Joc Max as Domecrackers; a 12" by Truth Enola which features  De La Soul. This is a laid-back, guitar driven  song which sets things of lovely. Next up is, what is probably a left-over from the "Black Star" album, as it was originally recorded in '98. Called "Another World" it's produced by UK wizards The Creators who cooks up an uptempoi beat promting Kweli and Mos going back and forth. Next up, is what is probably one of the illest 12"s I have in my entire record collection; the Spinna remix of underground monster Big Kwam's "Verbalize". This is a true underground anthem right here, complete with a hypnotic beat, lyricism at its finest and powerful scratches. Natural Elements' L-Swift, is joined by A-Butta and talented prodcuer Kenny "Dope" Gonzales on "Ride This", a pretty dope jawn but in my opinion the weakest track so far.

Brother Alphonso Greer (better known as Joc Max) get things back to the previous mood; a laid back joint to kick your feet back to; between the accoustic guitar, the low-key turntable work and Joc Max's spoken word message, this is  a very nice midtro. The younger Soul Brother Grap Luva pops up for a beautiful solo cut, "Touch The Sky", a mellow cut where Grap sounds right at home and where he's right in his element. A solo album by Grap around this time, produced by people like Spinna, Pete Rock, and Grap himself could easily have been a classic.

After another funky piece by Alfonso Greer, the team of DJ Spinna and Pharoahe Monch.returns with the non-album cut "Toooley Crew Personified". I'm still mad that i passed on the 12" single last week, because this is a real powerful joint. An an up-tempo, agressive ans powerful beat with Pharoahe revisiting the theme of his super classic "Stray Bullet". We need a full Spinna / Monch collabo ASAP.

The intennse power trip of the previous joints take a left turn to a smoky jazz club setting; a slow jam with Fender Rhodes, accoustic bass and live drums is the recipe for the beautiful voice of Alice Russel and  her "Someday". I need to check out some of this girls albums ASAP as pretty much everything I've heard so far been real graceful. Mr. Complex, of Polyrhythm Addicts, Subterrenean, and Structure Rize follows with more hardcore underground hip-hop at its finest. Drums bangs, horn glares and emcees dominate their respecciive pieces.


DJ Spinna is the one who really dominates the set however, and its when he is credited for producion that the "album" really takes off. Much of the stand-outs are also available on 12":s, but to have tracks like Big Kwam's "Verbalize" (DJ Spinna Remix), "Tooley Crew Personified", the brilliant Big Twan joint  "One For The Lyricist", the Nick Wiz produced banger "Kwamaniz" (once again Big Kwam), the De La Soul/Truth Enola collabo and many more. All in all, this is pretty good compilation that, unlike most collections could and should be played front-to-back.... TURN IT UP!!