No other artist in the field of hip-hop embodies the classic saying "what doesn't kill you, can only make you stronger" like Grimm. From surviving an attempted murder that put an hault to a career that had just started to take off, which permanently landed him in a wheelchair, to being charged and sentenced to a lifetime sentence (a case he managed to get off of, due to heavy studying of law practice in the pen). Despite this extreme tribulations, the New York emcee has constantly managed to come back stronger, rejuvenated; sharing his ruff life experiences without bitterly dwelling on the past, and at the same time packing a positive message for the black youth. His talents to describe his experiences of the dark and bright sides of life, and the fine balance to keep on the line, makes him one of the most interesting street poets of the entire genre; as well as one of the absolutely most underrated rhymers in the game. These thought-provoking qualities are heard all over his latest release, the brand new "Good Morning Vietnam" EP; a collaboration with producer Drasar Monumental, and the first release on the just launced Vendetta Vinyl imprint. And a very impressive debut release it is, both from a production- and lyrical/vocal- point of view.


I recently had a discussion with DJ K:O. about the sadness of the EP format having almost entirely dissapeared these days; while giving props to K.O. and the Elementality Productions crew for sticking to the original script with MadKem's just released EP. Grimm and Dakar follows the original tradition of the EP here as well which is a big plus in my book; I can't stand what EP:s has became these days - an EP is no more than 4 to 7 songs, with a running time of 15-25 minutes, not the 11 songs mini-albums (or even LP:s) clocking in at 40+ minutes that are often released as EP:s these days. "Good Morning Vietnam" sticks to the original script by including seven tracks, no filler material, clocking in at 20 minutes (not counting the instrumentals for each song that appear on the flip side). This is a big plus, because it's short but very potent with no filler. Furthermore, the sets flows together perfectly; therefore completely being free of any mediocre material that sound out of place. 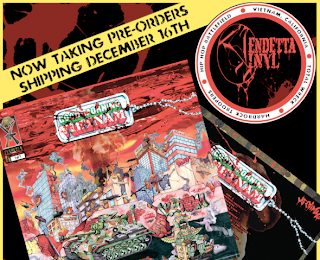 After hitting play, it quickly becomes evident that Drasar and Grimm is a MC/producer collaboration to be reckoned with, and in fact another vinyl EP will be released soon on the same imprint, which possibly could make this the first half of a full-length project depending on how you look at it. And if it holds the same quality as the first installment, it will be an amazing LP that should definitely find the way into your collection while they are still both available. The meeting between Drasar and Grimm spawns an impressive, thought provoking, rugged and raw sound which grows on one with each listen. The majority of the music is based strictly on samples, and impressively enough not one of the songs packs any familiar samples (that I can think of at least), and exists somewhere in the vacuum that exists between the '90s golden age material and 2012's underground tactics - an interesting combination to say the least. There's plenty of haunting tracks here, especially on Grimm's part who constantly provides heartfelt, and sometimes evem abstact verses, which is another reason why this should be given a lot of play from the true hip-hop fanatics. And if you're already in to Grimm, this is a must have for the collection.

Drasar constantly does an impressive job as well with these seven tracks, though I feel that maybe two songs can get slightly monotonous but not at all so much that it distracts from Grimm's performances; and considering this is his real debut release, this is definitely a guy that's gonna be on my radar from now on. It should be noted that when he REALLY bring it, it's often mindblowing material and builds a perfect chemistry with Grimm's introspective vocals. The EP opens up with the title track which sets things off lovely, with blasting sirens, gun shots, hectic vocal samples before the actual beat kicks in with pounding drums, muddy production (something that's all over the record; and I mean that in a good thing, it's a breath of fresh air to get away for the super clean sound that the majority of hip hop engineers and producers prefer these days). Agressiveness is the word here, and I love how the beat keep switching with various vocal samples riding on top; all in all it brings the A-game out of Grimm, and you know that's always a fantastic sign, and so it is here as well. Clearly a stand-out track.


"Tangerine" continues with more vocal samples. some weirder than others, and agressive boom-bap drums that really hit the head on the nail; and once again Grimm sounds rejuvinated over the meeting with Drasar; going from political rhymes to introspective stuff which again ties in to his versatility as an emcee. "Be Noble" is another stand-out track of the project, using his lyrics about Vietnam as metaphors for the street life and the enemies he has met throughout the years. The production from Drasar is more soulful, which works great here, it's a more somber cut than the previous songs, with a haunting electric piano line running through the entire song over the well-executed beat and bass that create the more hardcore aspect of the song.. 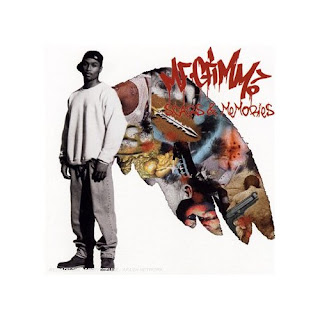 The best joint on the entire EP for me is the powerful closing joint, "Mater Matuata"; a beautiful and hearfelt dedication to his mother in typical Grimm fashion as he has never been afraid to share his most personal feelings on wax. The piano-driven beat and honest vocals makes it the perfect closer of the record; but don't be fooled, it's not a somber joint by any means - the rhythm pounds on HARD and the piano line adds another impressive dimension to the song. I won't mention every song here while there are clear stand-outs, every single track of the seven joints included here there's far from any filler, and this is one of those records that you need to play out in full as it's, not a concept album, but a well-thought out front-to-back listen; and then again it's only 20 minutes so don't you dare hit that skip button. Very well crafted and sequenced and on a final note, I strongly recommend that you pick this up while it's still available, and while we're waiting for the next installment from the duo, which if it's this dope, together can very well make for one of the best albums in quite some time when putting both installments together. It's not perfect but it's reality, impressive beats, and overall really good and I strongly recommend it to any fans of true, hardcore hip-hop. So what are you waiting for, head over to VendettaVinylVietnam.com for more info on upcoming releases as well as order the EP. And of course stay tuned to The Lost Tapes for more info on upcoming releases, exclusive tracks from the duo, and more. If I was to give it a rating, it would land on a strong 4/5 so make sure to grab a listen to it - essential material for any fan of the legendary Manhattan emcee. If you haven't heard it before, you are definitely in for a treat bro. ENJOY!

Purchase @ VendettaVinyl NOW
Posted by lost.tapes.claaa7@gmail.com at 10:46 AM