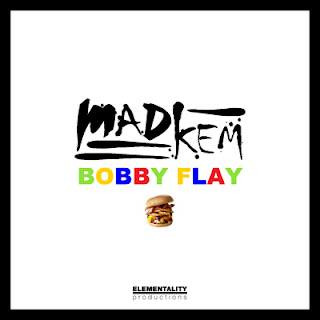 Recently I posted about MadKem's 2011 debut album "Charles Workman"; a great album in every way. For next year, MadKem is preparing his next album, titled "La Vie En Blue" and set for a spring release. Already in December you'll get a chance to hear part of the album as December 10 will offer the Extended Play version of said LP, featuring four clean versions of songs with instrumentals on the flip. Check this part of the press release, sounds like this could be an interesting project:

"Drawing inspiration from Pablo Picasso’s Blue Period, La Vie En Bleu, was created as means to convey MadKem’s experiences and thoughts since his debut. "Life is often about finding a balance between highs and lows" says Queens native, MadKem. "It’s a ying & yang thing. La Vie En Bleu will ultimately be paired with another LP, Kola La Vie, and tell one big story. La Vie En Bleu sets the stage and is my world through shades of blue." he says. The result of this extended play is a combination of storytelling, self-reflection and some braggadocio inspired by life’s difficult moments. “All of the songs aren’t necessarily somber”, he explains. “However, they were all born from feelings of frustration & despair, whether personal experiences or observations of everyday life.” Included in extended play are four songs from the long player plus instrumentals of those four tracks. "

The first single is called "Bobby Flay" and should get you hyped for the release next week. Other titles on the EP are "I Can Tell", "The Breeze", and "The Send Off"; producers on the EP are Analogic DroP Beats and Planas. Enjoy!

Email ThisBlogThis!Share to TwitterShare to FacebookShare to Pinterest
Labels: MadKem