Since Dilla's tragic passing in 2006 the market has been flooded with some incredible posthumous albums and singles/EP:s ("Jay Stay Paid"; "The Shining" though I really count that as an official Dilla album) and plenty of not so impressive releases ("Rebirth of Detroit", "Lost Tapes Reels", etc.). What is much rarer is to actually stumble across some super obscure Jay Dee production(s) that was actually released at the very beginning of his career; despite not being mentioned even in his official discography @ Stones Throw. There are a few of them out there, and this truly banging soul joint by Detroit soul singer T.H.I.Q.U.E. called "Sweet One" is perhaps the most interesting. You got a ruff draft of what would became Dilla's mid-'90s trademark sound (especially when it came to his classic soul remixes) and while T.H.I.Q.U.E. is no Anthony Hamilton or D'Angelo he can definitely hold his own over production as great as this. 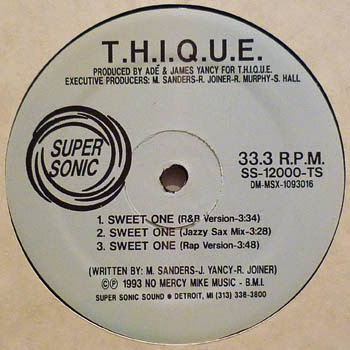 The "Sweet One" EP was released on small Detroit imprint Super Sonic in '93 and features three different mixes of the title track (the main version heard above, a rap version, and a jazzy sax mix) a long with the exclusive songs "The Last Dance" and "Back to Love". What's really interesting is that the entire EP is said to be produced by James Yancey and Adé, and a few things makes me strongly believe that Jay Dee is the main producer (or at least programmer) while Adé was more of a co-producer. Reason #1 being the sound esthetics of it, and especially the drum programming, but also that Adé was a local R&B singer himself with only one other production credit to his name - a remix of his single "Reach Out Your Love" which once again was produced with another beatmaker who went by Jeckyl. Check out the Discogs page for T.H.I.Q.U.E.'s "Sweet One" EP, which also includes clear pictures clearly stating it was produced by James Yancey and Adé and  is a Detroit production. If anyone happen to have a rip of the other joints from this EP, please hook me up, because it would be incredibly apreciated - also much props goes out to YouTube uploader NoMoreTime10. TURN IT UP!!
Posted by lost.tapes.claaa7@gmail.com at 2:11 PM