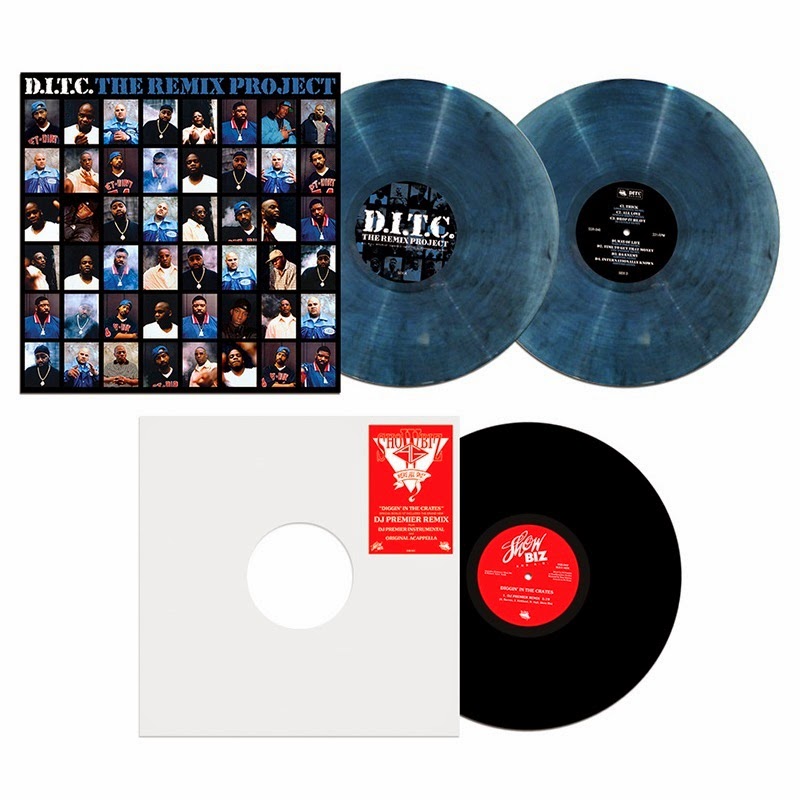 I recently ordered the CD version of the limited D.I.T.C. project "The Remix Album", mainly because I'm having some troubles with my turntable speakers and with shipping I feel that the Slice-Of-Spice vinyl release is way too expensive. Anyway, I salute D.I.T.C. for still keeping vinyl alive though, and for hooking up with S.O.S. They are now releasing a slightly modified version of the album (which I consider one of the year's bestt). For about $50 USD you get a full cover 2xLP with blue colored vinyls, as well as a bonus 12" of the DJ Premier remix of "Dggin' in the Crates" (a bundle limited to 350 copies) - which makes sense as the latter is the only of the twelve tracks not included on this limited version. You can also purchase the single 2xLP on classical black vinyl for $28.99. The album is also being released in an instrumental version for the price of 22 USD. Order your copy or copies of choice @ SliceOfSpice's Official Site ASAP (where you can also see the tracklist).

Beside this gem being on both vinyl and on CD when it was originally announced to be slold in the format of both. But what's really cool is the bonus track; the compact disc includes a second remix by Showbiz of "Best Behavoior" and a 9th Wonder take on "Casualties of a Dice Game". For the vinyl Showbiz ditch the CD bonuses in favor of hs own take on the '97 singles "Internatolly Known" and "Da Enemy". 2013/2014 Showbiz remixes of these joints would easilly be better than the earlier bonus tacks since we already had one Show remix of "Best Behavior". However, Instead he has opted to reuse two 1999 remixes which appeared on Japanese 12'' as well as the remotely rare "All Love" album. This is quite dissapointing, especilly when you add up the price and shipping and realize that you need to cop a bundle to get the Premier remix which is available on all other versions. The most interesting thing is that the alternative "Da Enemy" version for the first time here is given Showbiz his proper credit for his light touch-up of the OG.

Posted by lost.tapes.claaa7@gmail.com at 4:02 PM