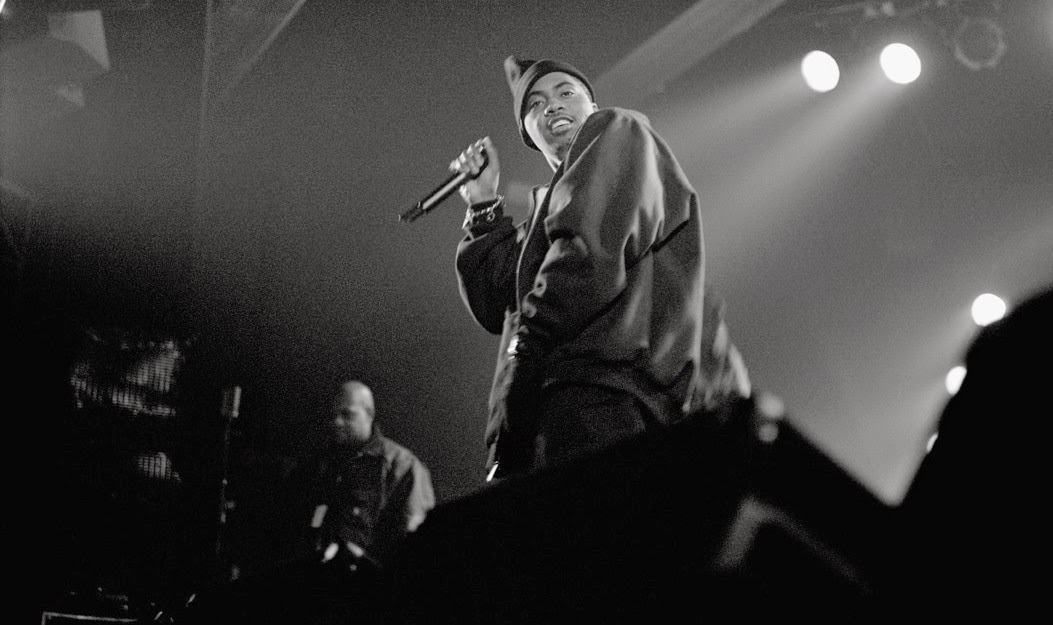 Today is the 1st of May, which is pretty much my favorite month of the entire year, and I figured it'd be a good thing to drop something quite extraordinary on y'all. You will most likely have heard everything on this presentation before, but for fans of Nas (and seriously, who isn't?) this is exciting stuff as we are finally able to confirm a long standing myth, provide an original tracklist, and as always provide a download of the project in question. In usual order all tracks are here featured in the best possible quality I could find them in. So let's get down to business... I am talking about the "Death Of Escobar" album by Mr. Nasir Jones. Any Nas fan are well aware of the rumors surrounding that title although no one quite seem to know exactly what it is... A concept album? The original title for "Stillmatic"? A fan made-up fake title? There's been a lot of bogus tracklists and downloadable bootlegs floating around the internet for years now - none of them giving a proper representation of what the project really was. To be honest, I personally never made much of the "Death Of Escobar" rumors. At best I figured it to be a working title that Nas and Columbia used when working on and building up hype for "Stillmatic". I did however like the title and what it represented but that about as far as it went.

Now, the other day I received a very interesting e-mail from a guy called Cairo or CairoKid who knew me from the site as well as the Philaflava forums (so many good peeps over there!). He gave me the key information which would reveal that "D.O.E." was in fact a proper album that was completed and scrapped pretty damn close to its original release date. However, it is not quite what most bootlegers and fans has envisioned it to be - the truth is that it's more of an early version of the compilation that this site is named after - 2002:s "The Lost Tapes". Cairo told me he remembered reading an actual review of the album in VIBE magazine in their February 2001 issue, where it was awarded a glowing 4 records review. Not only did he tell me this intriguing fact, he had actually dug it up via Google Books (read the magazine here). In this little article the album is titled as "D.O.E. Limited Edition - Volume 1 (Death of Escobar)" and speaks of it as a project made up from new tracks, bootlegs and remixes while completely lacking skits. Specific tracks mentioned here are "The Foulness", "The Rise & Fall", "Tales From Da Hood", "Your Mouth Got You In It", and "Poppa Was A Playa" - all excellent jams. The next piece of the puzzle came through a news update sent out by Sony Music Street Team UK to those signed up to their mailing list back in early 2001. This announcement, which was also dug up by Cairo, provides an early tracklist for the project (including producers and publishing credits) along with the following message: 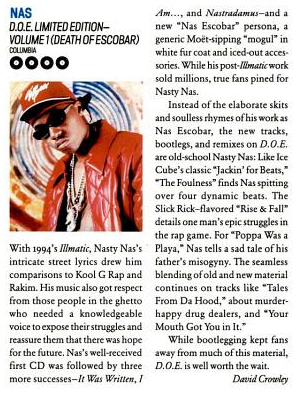 "THE FORTHCOMING NAS ALBUM IS ON HOLD AT THE MOMENT, HERE'S THE LATEST PLAN" - "Nas wants to release 'Death of Escobar' first with 'Stillmatic' to follow. 'Death of Escobar' is the bootleg/sessions project. The project will feature the tracklisting below plus three new tracks. This tracklisting could and probably will change. The three new tracks will explain Escobar's death." "No music has been discussed or recorded for 'Stillmatic'. In a best case scenario the album will be released June 2001". You can read the original post via this mailing group. It says that the tracklist is not final but it's still what me and Cairo have used for reference when putting this together. However I did notice that "Poppa Was A Playa" isn't included on the tracklist from the e-mail blast, but is mentioned in the VIBE review so we went with that as well. The three new tracks that was not yet completed when the announcement was made might never have been completed for all we know (notice that nothing of the sort fits a description in the VIBE review). The track that came to my mind from the description of Nas rhyming about the death of Escobar is the song "After Life"/"Amongst Kings" which was supposed to appear on "I Am...". If you have any other suggestions of tracks dealing with these topics, please drop a comment or send me an e-mail.

When putting together the tracklist mentioned above and playing it as an album it's clear that the majority of it finds Nas in an introspective mood, reflecting over his life and career over moody, midtempo beats often favoring piano and/or string samples. Nas has always been very ill with these type of joints, and it works well here. It works even better in the context of the album, as the depressive mood pieces like "Rise & Fall", "Drunk By Myself" and "My Own Worst Enemy" are intercut with straight up boom bangers like the underrated "The Foulness", "Tales From The Hood" and the "Hard 2 Tell" remix. Unlike "The Lost Tapes", "D.O.E." stretches over a larger amount of Nas career as it includes the previously released B-side remixes of "Street Dreams" (with R. Kelly) and the classic Large Professor flip of "It Ain't Hard to Tell". This also makes it much more evident that it is a compilation, whereas "The Lost Tapes" felt as much as an album as any LP in Nas' catalouge. It does have a nice flow to it however, and there are plenty of bangers on it, but ultimately it was a wise choice to flip the concept into the aforementioned "The Lost Tapes" a year later. Certainly, a much tighter album without anything even resembling filler material while this have a song like "Never Gonna Give It Up" and the "Street Dreams" remix (the latter which I like, but I know many peeps who despises it). In other words "D.O.E." feels a little all over the place but overall it's a very enjoyable listen that for the most part works as a whole. The biggest travesty is not that the project was scrapped, but that some true masterworks found here ("My Own Worst Enemy", "The Rise & Fall", "The Foulness") still haven't been given a proper release. Sometimes I wonder...

So without further due check out the most final version you'll ever gonna hear of Nas' scrapped legendary album "Death Of Escobar Volume 1" for yourself. Although you're likely to be acquainted with pretty much everything on here, I think every Nas fan should get a kick out of listening to this at least once Last but definitely not least all thanks and props goes out to Cairo for his amazing discoveries and willingness to share it with me and all The Lost Tapes readers. This is exactly the type of stuff that gets me going, so mad thanks again Cairo! And also I can't forget a big shout out to the big homie Tokyo Cigar and The Dice Academy for putting the getting the ill artowrk you see below so major thanks to them as well! And for the rest of y'all... TURN IT UP!! 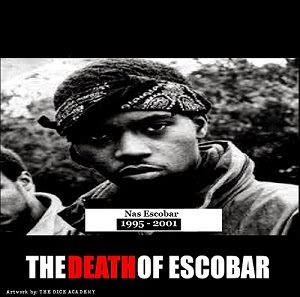