Last year was kind of slow on the D.I.T.C. releases (save for "Mugshot Music"'s 2xLP release for us EU heads). In 2014 this amazing crew is back at it, full force - kicking things off with the Ray West/OC collaboration "Ray's Cafe", followed by "D.I.T.C. Remix Project" (featuring excellent remixes from Lord Finesse, Diamond D, Buckwild, Showbiz, Ogee and more) at the beginning of this month, and this Tuesday saw the release of another very well-crafted album in the form of Diamond D's collaboration with BIGREC in "Doomsday". Next in line is another crazy album from the camp, filled with that raw New York boom bap sound we all love; the fully Buckwild produced album for the always sick Queens' emcee Meyhem Lauren. 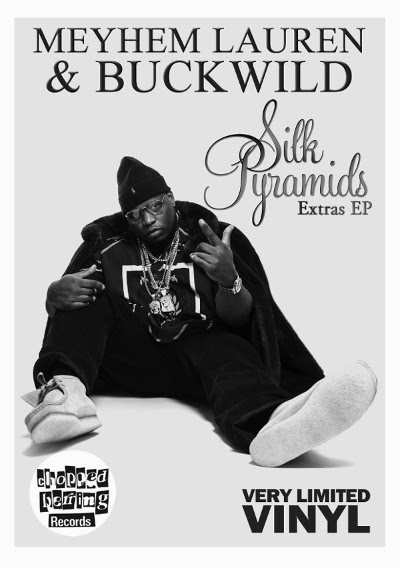 "Silk Pyramids" is officially released on May 27 via Chopped Herring Records in a plethora of different versions. Beside the main release on CD, the label is also releasing a very limited 2xLP run of 500 copies, an Extra EP featuring three extra joints, a couple of freestyles and a few instrumentals. Add to this that there's also a white label 12" featuring six accapellas of songs appearing on the album. While everything beside the CD is quite pricey if you're not in the States, this is a must have and to show how much faith Buckwild, Meyhem and Chopped Herring have in this project the label have released a 20 minutes sampler on YouTube featuring tracks from both the regular album and the "Limited Extra EP" and it's sounding fucking BRILLIANT... Then of course we have already heard three singles in full high quality already ("Q.U. Hertilage", "Street Hop", "Silk Shirts & Yellow Gold"). To read more about what's on all of this different releases and pre-order your copy of choice head over to Chopped Herring Records.
Posted by lost.tapes.claaa7@gmail.com at 12:35 AM