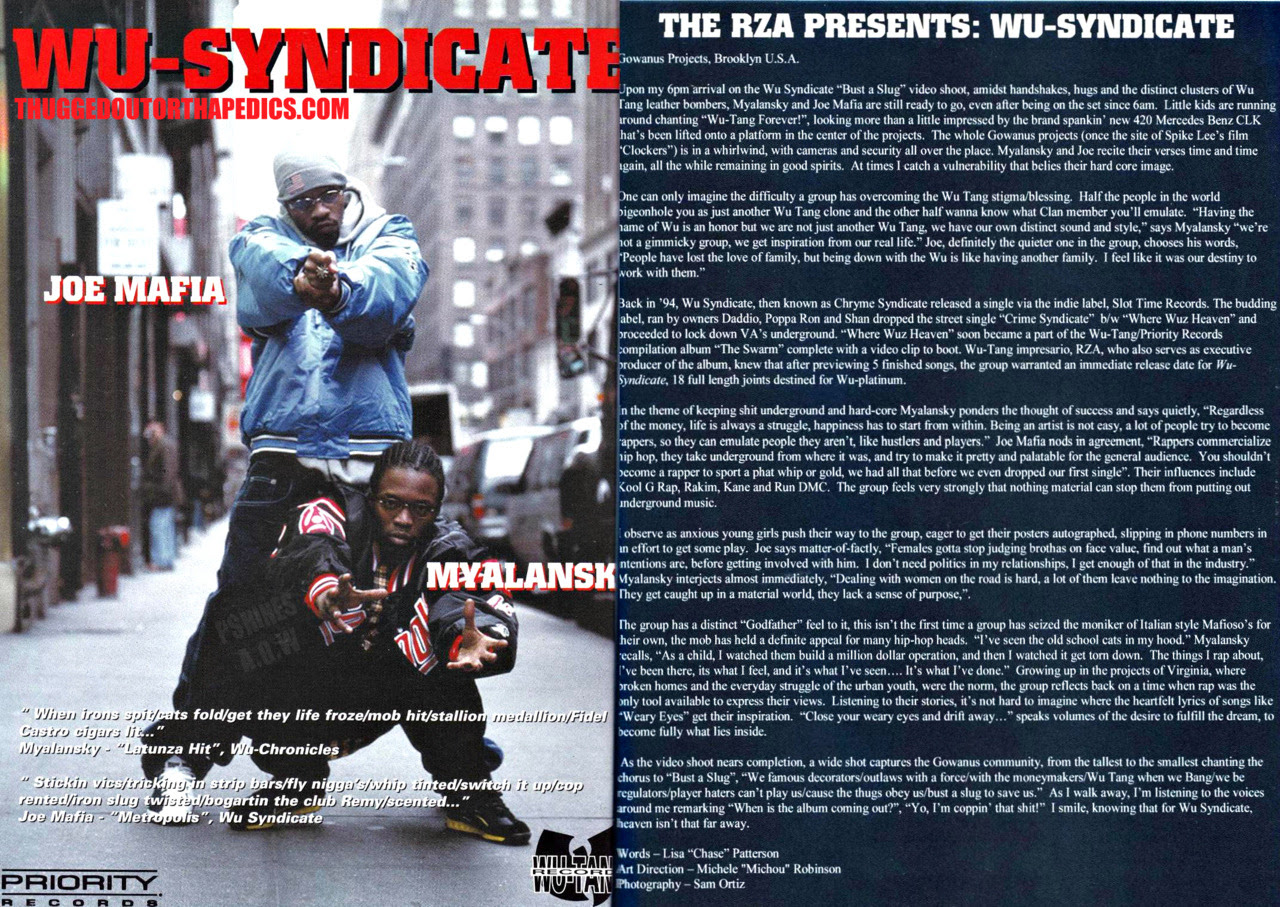 Remember back in the mid- to late '90s when pretty much everything with the Wu-Tang logo on it was the equivallent of high quality hip-hop? The best example of this is the first Wu-Tang Killa Beez' compilation, "The Swarm" (1998), which featured some choice cuts by the Wu generals like "Execute Them", "Cobra Clutch" and "Justice For All" but the fattest jams came from relatively unknown emcees and groups such as A.I.G. (Darkim Be Allah and Allah Wise), Royal Fam/Timbo King, Ruthless Bastards, the recording debut of Black Knights and North Star (including the lyrically fierce Holocaust), Tha Beggaz, Cappadonna and the duo Wu-Syndicate whose heartfelt "Where Was Heaven" was one of the LP:s most memorable tracks. The majority of these artists, including Killarmy, Sunz Of Man, Killah Priest, Shyheim and La The Darkman, released high quality albums in the course of the next two years; many which still to this day holds up as timeless front-to-back bangers. A long with a flood of releases from GZA, Raekwon, Method Man, Bobby Digital, U-God, Inspectah Deck, Ol' Dirty Bastard and Red N Meth between '98-'99 the amount of product carrying the Wu logo basically overflooded the market and had the casual hip-hop head lose interest. Many of these albums have, however, been reevaluated and reappraised, proving to stand the test of time.

One of the most overlooked albums of this period, even amongst the hardcore Wu-Tang Clan fanatics is Joe Mafia and Myalansky's self-titled debut as "Wu-Syndicate". The 18 track album featured a gritty hardcore sound, with heavy basslines and agressive drum programming reminiscent of a cross of '97:s Wu-Tang Clan and mid-'90s Mobb Deep - the latter both in sonics and lyrics. Executive produced by The RZA, with two tracks produced by Wu-Elementz beat head Allah Mathematics, and engineered by RZA's right hand studio man Nolan "Dr. No" Moffitte. But that's pretty much where the real Wu-Tang connection stops; despite their name and the album being released on Wu-Tang Records "Wu-Syndicate" is really a family affair. "Having the name of Wu is another but we are just another Wu-Tang, we have our own distinctive sound and style", says Myalanski in '99. "We're not a gimmicky group we get inspiration from our real life," he continues. Hailing from Virginia, the duo that became known as Wu-Syndicate actually started out as a hip-hop trio sharpening their skills in their hometown of VA under the name Chryme Syndicate. In fact in 1996 the group self-released their 12" "Chryme Syndicate" BW "Where Wuz Heaven" on International Chryme Syndicte (the labels only release). With both sides produced by DJ Devastator, caught the ear off RZA, Divine or Power, and the group was instantly signed and started work on their debut album for the label.

From the group's original inccarnation the group officially consisted of Joe Mafia, Myalansky and their friend and fellow emcee Napoleon (Corey Hart). Add to that the fact that already from the start they built a strong musical relationship with local DJ and producer DJ Devastator (David Walker). Even when it came time to record the album in early 1998, Napoleon was still a part of the group and participated in several sessions, recording verses for close to half the songs that eventually would end up on the full-length. Unfortunately, only months after the deal with Wu-Tang Publishing went through, Hart was incarcerated on an outstanding charge from 1997 and thus could not contribute any more to the album, resulting in the group becoming a duo for the actual album. However, Napoleon played a similiar role on "Wu-Syndicate" to that Raekwon played on Ghost's "Ironman" or "Bulletproof Wallets".

However, you could say that to be fair Wu-Syndicate was for all intent and purposes still a trio considering that their original producer DJ Devastator played a huge role in making that record made. Not only did he produce the most well-known jams like "Where Was Heaven", "Lutunza Hit" and "Thug War but he oversaw the album, he also single handedly provided the music for 12 out of the LP:s 17 joints. The other cuts were handled by the aforementioned Allah Mathematics, E. Dred and three traccks by Smokin Joe. But there's no question that it's DJ Devastator that set the sonical tone and vibe for the album, and he no doubt did a great job. Strangely enough, despite the record selling gold in the US pretty much all the main players involved pretty much dissapeared all together from the scene. DJ Devastator did a pretty ill track onn Raekwon's sophomore '99 effort called "Real Life" , Myalansky and Joe Mafia both released respective solo projects on the low-tip around 2008 - two albums that really didn't have much to offer even the most hardcore fan of the album this article is about. But in fact in 2010 the two reunited as Wu-Syndicate again, albeit without both Napoleon and DJ Devasator, on the full-length "Gremlinz". I haven't personally listened to it yet but from the reviews and articles I've read about it, it seems the reception has been quite lukewarm. I think I'll stay clear off this one and just remember these guys for the still overlooked boom banger that is 1999:s "Wu-Syndicate".

It's hard to believe that it's been 15 years since this undrrated Wu-Tang LP first hit stores. You can stream the entire album @ YouTube or Spotify, though I strongly suggest you pick up a copy over @ Amazon or iTunes if you still don't own it. Below you can listen to the first Wu-Syndicate joint recorded after the group's signing with the Wu, a collaboration with Master Foul called "From The Grips". The slow piano rolls blending with the thumping drum programming makes for a perfect match for Myalansky's.Mafia's and Master Foul's thugged out lyrics. I also uploaded the classic remix of perhaps The Syndicate's most famous single - "Bust A Slug" which features Ghostface Killah joining his Killa Beez brethren for the one and only time. Although Ghost would soon reuse his verse on the US version of "Supreme Clientele" - but who cares, the verse sounds just amazing together with Myalansky and Joe's thugged out rhymes and Smokin' Joe's headbreaking boom bounce. Let's hope for another Wu-Syndicate album with DJ Devastator and Napoleon and a real dope sound again, but I'm definitely holding my fingers crossed. At least they have one outstanding album, which is more than I can say for many highly praised hip-hop artists.