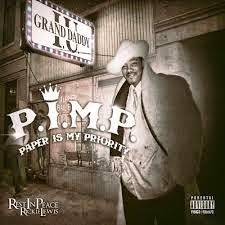 It's a true fucking shame the way Grand Daddy I.U.'s career has been handled. In 1990 the Stroong Island spitter and producer released his debbut albbum on Cold Chillin, ""Smooth Assassin", that to this day is viewed as one of the lost Cold Chillin' Classics of the late '80s/early 90s. After another album on C.C. in 1994 and an intense guest verse on Big L's "Da Graveyard" he kind of faded into obscurity until 2006s when he came back with "Stick 2 The Script", a stellar LP featuring real ass lyrics over beats by Grand Daddy IU himself (who's a very skilled producer in his own right), Large Pro, DJ Dooom, Marco Polo, Chucky Madness and Lotto. More recently he gave a lassting impression on Diamond D's recent "The Diaam Pieece" LP on the single/video "The Game".

Now I.U. has completed another album that he just released on our asses called "P.I.M.P. (Paper is My Priority)". I'm in the midst of listening to it right now, but this is fucking serious, for a quick eexample take a listen to the single/video "Suasquatch Feet" above, produced by GWop Sullivan.. This track is really, really dope - I.U. really got some thing on his mind and it he does it straight from the heart. The booming beats, turntable work, beauituful trumpet and the piano keys samples makes this a real winner. And as far as I'm hearing at this moment (I've bumped about half by now, ni skips) the entire album is in the same vein, Grand Daddy I.U. is the true definition of a  low-key legend, been doing great music for more than 25 years, inspired countless commercially more succesfull artists (including Nas and Jay-Z) yet only real music conniseours even know the name, But what the hell, at least he got a loyal fan bse, just wish it was bigger.

So far the album is available for digital HQ purchase and free streaming (which you'll find below), but will also be released on CD and limited golden cassette via RedLineMusicDistribution on March 17. The vast majority of the 20 track set is produced by the artist himself, with very few exceptiions, the aforementioned single "My Neck Of The Woods" is done by BLUNT; the intro is a Marco Polo banger; and finally ´"Sasquatch Feet" were produced by GWop Sullivan. This album is a real banger so don't sleep when it actually does drop - e.g. from UGHH. Also head over to GrandDaddyIU.com for more albums, mixtapes, music and info. Salute!