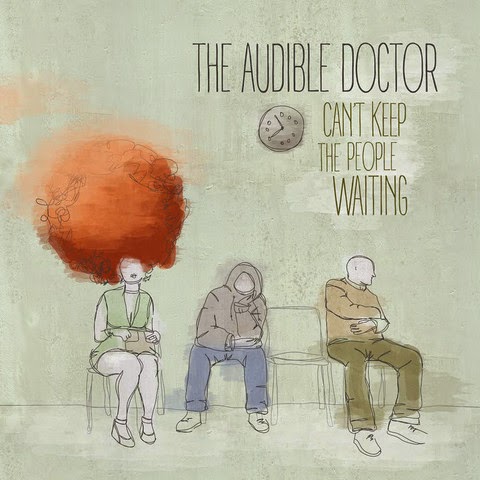 If you ask me I'd be quick to say that The Audible Doctor is one of the absolutely most interesting young producers  out right now. He got a sound of his own, without ever letting the hip-hop purists down, which is a feat in itself. And on top of that he's slowly but surely building up a pretty damn impressive catalouge, both as a solo artist and through albums with legends like Onyx's Fredro Starr. With each release he has really grown on the microphone as well and it has been a blessing following his career.

His latest release is called "Can't Keep The People Waiting" and was first released a couple of months ago as a diigital download only. Produced entirely by Audible Doctor, the records which switches betweem agressive synths, knockout drum programming, longing vocal samples and smoother songs which together gives the project a very nice balance, is now finally being rleeased on vinyl. You can purchase the lmited vinyl right now @ Fat Beats, but once they are out they are gone. so HURRY UP AND BUY! Joining the good ol' Doctor on the mifrophone is Bumpy Knuckles, Astro, Guilty Simpson, Hasaan Mackey, Consequence, and John Tired. The EP also weaves together songs through warm soulful instrumental interludes, something I always had a big thing for this type of projects. Oh and on a related note, Aud Doc just revealed that he's soon finished with "The Spring Tape" and if you've been following this blog you know I went fucking bonkers over those seasoned themed EP:s. Stay tuned for more info as it unfolds!

Posted by lost.tapes.claaa7@gmail.com at 1:39 PM