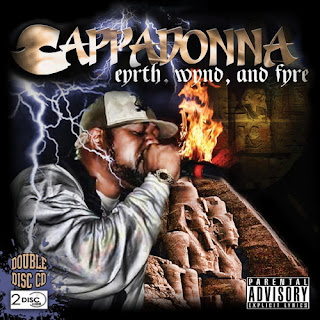 Few emcees has such differences between his highs and his lows as Cappachino; he has dropped some of the best verses of all time ("Winter Warz", "Ice Water"), his '98 debut "The Pillage" was a real solid album that followed the Wu-Tang tradition in both lyrics and production; but he has also been responsible for straight up embarassing stuff like "The Yin & Yang", most of "The Struggle", his verses on "8 Diagrams" and so forth.
﻿
But every once in a while his former self comes back in effect, his recent cameos on his Wu-brethren's solo albums, especially his verses on "Apollo Kids", "Man With The Iron Fists" and definitely not least on "Wu-Block", show flashes of past glory. With a Cappadonna album you never know what you're gonna get, but one thing is sure, there's at least a few dope joints. His upcoming release is called "Earth, Wind, and Fyre" and hit stores on February 26 on RBC Records with production by J. Glaze, Kevlaar 7 (of Wisemen), Stu Bangas, DJ Snips, and more with cameos from rhymers like Solomon Childs (p.k.a. Killa Bamz) and Sav Kills. The lead single is called "Real Life" and is a definite headnodder, so stay tuned for more music from Cap which you can pre-order here.