Yesterday I saw Marc Singer's brilliant 2000 documentary film "Dark Days" which follows a group of people living as homeless in a set of underground tunnels in NYC. It's a great portrait, beautifully shot in black and white, and an important document of those who live on the outskirts of society. I remember hearing about DJ Shadow scoring the music for the film around the time it came out, but I never saw the actual film before. Most of the music comes from "Entroducing", with additional cues from "Pre-Emptive Strike" and "Psyence Fiction", and although the music was lifted from existing sources works absolutely perfectly with the gritty images.

However, Shadow also composed one original piece for the soundtrack, which is the "Dark Days Theme". This was his first released studio recording following the often underrated UNKLE album, and both mixes of the song has that dreamlike, epical quality that made Shadow's earlier stuff stand out so much and made him such a loved character on the underground scene. The single was pressed up on limited edition CD:s and 7" singles, but are of course out of print these days, but you can check out this fantastic soundtrack to a strongly recommended movie below. 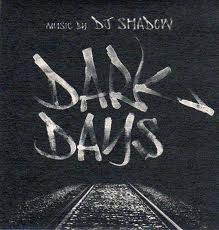