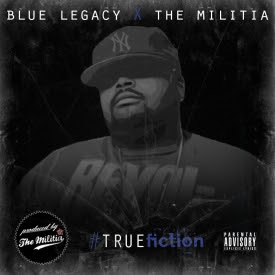 In late 2012, the sounds of something really rugged and raw, yet soulful, started making its way from Johannesburg to the hip-hop culture via the world wide web. I'm talking about producer The Militia, an incredibly fresh producer that mixes the best of his South African muscal herritage with his love for that good ol' New York boom bap. Following up on "Timeless Classic" and the "Look What The Streets Made" EP with Curtessy, The Militia now returns with a third extended play; having perfected his style and sound even further. For "True Fiction", the vocals is handled by ruff voiced Queens' emcee Blue Legacy who does a fine job at riding The Militia's soul ridden grooves, from the introduction of who he is and what he's about on the first single "Snowdrifts", which is a real street anthem. There's a few times that his rhymes doesn't really comes off as they should, either through a corny punchline or a clichéd rhyme, but all that is quickly overshadowed when Blue truly rhymes from his heart, which he does a lot; the hook for the aforementioned opener is a great example of where he's coming from - "I wrote this focused, but feeling hopeless/ Bars is sculpted, like it's snowdrift/ Vultures like locusts provokes this, leave you with the Four-Fifth, laying in that snowdrift". Set over The Militia's haunting, dark, piano driven beat, the opening couldn't be much better.

The next four songs have a more soulful vibe to them, something that's at times a little similiar to what might have came out of a 9th Wonder and Apollo Brown collaboration, with lots of chopped up soul samples, hard, driving drums, melodic keys and strings. From these joints one of the standouts are "Facts Of Life"; a beautiful summer vibe joint with a great vocal loop layered under strings, a double rhythm track, and Blue Legacy going in from then to now, using the positive music to supply a positive message about taking the good with the bad and never giving up on your dreams, because thoughts and hard striving can, and will, often become manifestations. Another real standout is "My Chemical Romance", featuring Phryme AKA Boss P. Both spitters touch upon their lives and struggles growing up in a rough borough of Queens, taking to the Hennessy (the chemical romance) to cope with fallen friends and life's disappointments, being young and wild and not having a thought about dependence and alcoholism ("last call, taking shots til' I fall - damn I'm drunk/ Henny for breakfast, Scotch for lunch/ Mama said I should get to AA, they may help my ass out..."). All this takes place over another unmistakable banger from the hip-hop professor in charge; utilizing horns, a chopped vocal sample, pounding drums, that with the lyrics creates a real headbanger that any one with a love for the hard liqor will find just as addictive as their favorite brand. Another real nice touch worth mentioning is the guest apperance of Lost Tapes favorite Rome Clientel on "Lyrical Psalms" where the trio's chemistry is basically oozing out of the speakers.

As mentioned in the opening of this review, the hardest track is by far the opening "Snowdrifts", while the following joints are more in the school of soulful boom bap. That is, until the final track on the EP, fittingly titled "Game Over"; both the grittiest and most original song on the entire record. On my first listen i felt that the song was out of place next to the preceding five tracks which together formed a coherrent sound, but on each subsequent listen the track has really grown on me. The previous dark pianos, vocal chops, and layered soul/hip-hop blends are traded for ROCK HARD drums, masd synth sounds, and samples from good ol' Atari. Similarily, Blue and guest Loue The Profit fills their verses with double entendres which can be interpreted as video game references, the end of the record, or "Game Over" for lesser emcees and producers. There's also something very appealing framing four more laid-back (I say that in a very loose sense) cuts with two real dark, hardbodie joints.

In conclusion, "True Fiction" is a terrific EP and The Miltia's finest offering yet. The originality of the project isn't anything reveletory, we've heard these concepts before but they are done with so much skill and love that you can't do anything but nod your head in agreement while listening, most likely with a big smile on your face. With only six songs, there's no room for filler or mediocre songs, and luckily this one is completely free of that; this is one of them joints you play from front to back. I really hope we get to hear more from Blue Legacy again soon as well; as dope as he is here, I have a strong feeling that he will evolve with each release and really come into his own, and then you better all watch out! Unfortunately, records like this often go straight over people's heads, even so called hip-hop fanatics. If guys like this keep banging out shit like this and we journalists and serious bloggers do our part to spread the word, hopefully these names will be very recognizable in a near future. Check out the full EP below, linked straight from TheMilitiaHipHop.com, and TURN THAT FUCKER UP!!