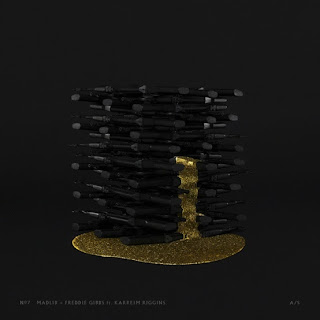 I'm so anticipated the full-length project by Madlib and Freddie Gibes which should be out later this year; the two 12" singles released since last year are truly incredible and some of the best I've Heard from the very talented Gibbs. Now comes Another low-down Dirty banger from the duo, which also features the talented drummer/beatsmith Karriem Riggins getting busy to great effect. I've been praying for a superb Gibbs album that you can truly play from front-to-back; I love his emcee style but many of his beats does not appeal to me, with some true standouts being available on each project.
The MadGibbs LP will hopefully change all that, as I feel the dirty sample driven sounds and chopped up drums is a perfect fit for Gangsta Gibbs based on the several singles and B-sides we've heard from the team so far. Their collaborative album, "Cocaine Pinata" as it is now called is shceduled for a late October release and I have a truly, great feeling about this one... If the're no pushbacks or setbacks there' just a couple of months until we should have this in our respective record collections. Take a listen to the Riggins x Madlib x Gibbs on the single "City" below, and stay tuned for more info on the project. Could this be one of the best albums of the year, I would be extremely suprised if it doesn't reach a real Buzz in the underground circles. All tracks are straight up fantasitc, and I am really starting to Think that 'Lib and Gibbs display true Chemistry togetrher..