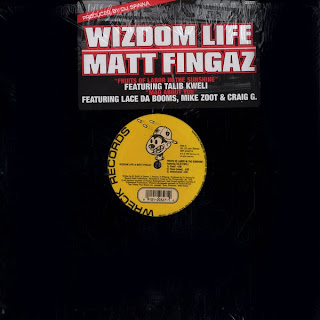 It's been a while since I did a 12" Throwback post, so here goes one for a single I stumbled across in a used vinyl store about a year ago. I picked up on the strength of the DJ Spinna production who is easily one of my favorites to ever do it. For this single New York emcee Wizdom Life teamed up with Matt Fingaz (a.k.a. FingaTip), better known as a manager and the founder of '90s indie powerhouse Guesswhyld than a rapper, to drop this pretty fat 12" single on Wreck Records back in early 1998. This was their only release together, and Wizdom Life faded into obscurity after dropping a album produced by Shawn J Period, released only a year after this single while Fingaz decided to focus his talents in other aspects of the music biz.

Both tracks found here features the production talents of DJ Spinna, who makes an exceptional job as always. The A-side, "Fruits of Labor in the Sunshine" marks an early collaboration with Talib Kweli who delivers a thought provoking verse much in the same vein to what was heard on classic Black Starr LP with Mos; the apperances that once and for all put him on the map. There's no question that Kweli outshines the other two emcees here, but the two main artists does a pretty good job as well. The production is a perfect compliment to the lyrics of the song, with a kind of laid back beat that still got a lot of drive, and beautifully chopped up soulful vocal and instrumental loops that even got a slight reagge vibe.

The B-Side "Mad About You" is one of those booming posse cuts that we're so popular in the '90s, and it's great to hear some of those real underground emcees that totally faded into obscurity only a  couple of years later all ripping it on a track like this (although they all had a lot of material out in the '90s; mainly banging 12" singles). Over a somewhat harder Spinna beat than the previous, with pounding drums, hard kick and snares coupled with a shaking bassline guiding the talents of Craig G, Lace Da Booms, Mike Zoot and  the two main artists of the record. Five emcees showing their passion for rhyming over carefully chopped horns, and some vintage Spinna cuts is definitely one fan of '90s golden era hip-hop NEED to hear... This is just another one of those hundreds of cool underground singles that dropped in the mid-'90s but it's also a definite keeper that you should not sleep on, so grab the complete single below in a nice 320 kbps rip, and whatever you do.... TURN IT UP! 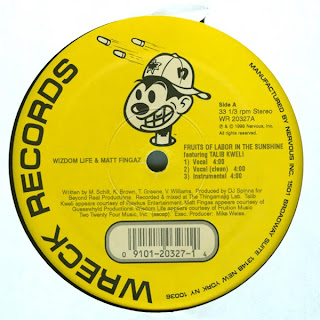 WIZDOM LIFE & MATT FINGAZ - "FRUITS OF LABOR IN THE SUNSHINE" VLS
Posted by lost.tapes.claaa7@gmail.com at 9:50 AM