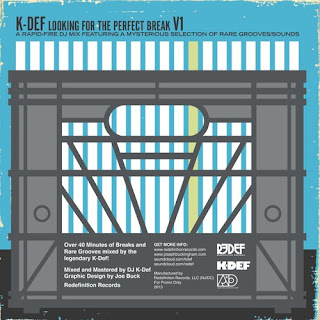 If you more than a casual reader of The Lost Tapes, you certainly know that I always  keep my eyes, ears, and wallet open for anything bearing the name K-DEF.Although I've been a dedicated fan since I first heard his work on Tragedy's 1993 sophomore LP "Saga Of A Hoodlum" which was the first project where his sample-heavy style really DJ Eclipse, anc  Since he hooked up with Marley Marl and Redifinnition Records in 1992, 'Def's career really took off; producing classics for LL Cool J, Shai/Jay-Z, Craig Mack, Artifacts, Mic Gernuímo, Mikyll Miers, and more. As part of Marley Marl publishig 'Def's appeares on standout records in the -mid'90s, really enhanced the deep basslines and hard drum programming that defnied an entiry era. There were a few albums produced by Marl and K-Def that unfortunately got shelved, mainly Sah-B's 1995 debut and World Renown's self-titled album.
'
But DEF is not only a class A producer but also a tremendous wheels-of-steel architect, having filled in for certain quality mixes like a promo CD for Gasface Magazine, and so on. Redefinition's "Looking For The Perfect Break" LP/CD is a brilliant 40+ minutes set of Hansford mixing a wide array of funk, soul, breakbeats, and hip-hop in a high-fidelity seamless mix with no annoying DJ drops or shout outs. The record sleeve is crated by the always trustworthy Joe Buck, who does a great job as always. I also added the comple B-side which was posted a while back, so you can hear how it wil sound on your turntable!

Posted by lost.tapes.claaa7@gmail.com at 9:57 AM