Following a couple of mentions of an updated version of Inspectah Deck's debut album that I compiled for my own personal listening, I've gotten a few requests to upload it here. I'm very much an album guy so when an LP drops that's on a 50/50 level I don't come around for the good parts of it as much as I actually would want. In this digital age, however, through addition and subtraction of certain tracks, switching up the original sequencing and so forth shich really enhanced a lot of albums in my collection which otherwise mostly been collecting dust. One of those albums is Inspectah Deck's "Uncontrolled Substance" which I originally picked it up when it dropped in late April, 1999. INS always been one of my favorite emcees and lyricists so it's unfortunate that he, to me, still hasn't managed to drop a true front-to-back masterpiece on par with the Wu's first round of albums. "Uncontrolled Substance" is without a doubt the best entry in Deck's solo catalouge, but at the same time it was one of the weaker links in the Wu saga up to that point. With that being said, it is actually a good, but not great, debut as there's really no wack records here (though a few benefit from the skip button) and a handful of its tracks fail to stand out or leave any lasting impressions. However, without exceptions it is the production and beats that are lacking as INS performance throughout is that of a lyrical  monster who paints vivid pictures with his verses. So why not rearrange and update The Substance into the close to perfect album that INS was close to delivering in the late '90s?


Of the 17 tracks heard on this version 10 is directly lifted from the original retail source. The completed album only had two tracks produced by The RZA ("Movas & Shakers"; "Friction") which was one of the complaints voiced about the Wu solos of the '98-'99 era. With that in mind I have added a gang of dope RZA / INS collaborations recorded before or around the same time as "Uncontrolled Substance" was recorded; "Execute Them" from the first Killa Beez compilation, "Semi-Automatic: Full Rap Metal Jacket" from the "High School High" soundtrack, "Tres Leches" from Big Pun's "Capital Punishment" and "Let Me At Them" from the "Tales From the Hood" soundtrack (the latter credited to Deck as a producer, but the credits reveal that  R. Diggs is one of the writers of the song, most likely as a un uncredited co-producer as I can't imagine Deck needing Rakeem as a ghost writer). The latter was Deck's first released solo track with Deck spitting bars of fury, over an agressively dark beat. Although it was recorded in 1995 it flows well with the other material heard here; not to mention it's one of the most powerful album intros you could ever ask for.  Another cut that sounds great within this set comes with Pete Rock's "True Master" which to me sounds like a very smooth transition from Pete's other beautiful contribution, "Trouble Man". "Nightshift" was, very unfortunately, originally cut from the album along with a track called "Settlement". I decided not to include the latter since I didn't feel it lived up to the better tracks from U.S.
As you notice this is hardly filled with rare tracks and alternative versions as its purpose is to present a plausible and even iller re:imagining of the amazing late-'90s Deck album. And that is, without straying too far away from the original formula. I strongly suggest you put on some good headphones, turn the volume up loud and let this one play out from the first to last track! Who knows, maybe you end up like me, never listening to the retail album but remotely often throwing this one on! For me this version is a very solid 4 mics rating, while the retail album is very strong 3, or 3.5 if I'm being nice....SUUUU! 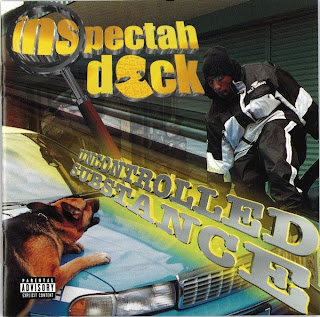 INS - "UNCONTROLLED SUBSTANCE"
Posted by lost.tapes.claaa7@gmail.com at 4:40 AM