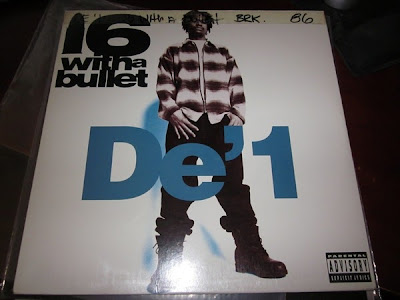 I'm not gonna front and claim to you that I know a lot about rapper De' 1 more than from the two 12" singles, which today is quite rare, that he released between 1993 and '94. Both tracks featured exceptional pounding, bass heavy boom bap production mainly supplied by the likes of K-DEF and Marley Marl who was an incredible tag team at this time. Although they together produced outstanding albums for Intellgent Hoodlum, Lords Of The Underground, Real Live, and a few others there were just as many that got shelved at last minute and has never seen the life of day as far as retail projects goes. With the emergence of Dre's and Death Row's sophisticated G-Funk, Wu-Tang's mystical but HARD new approach, Redman's hilarious image that never took away from his lyrical extravaganza, there's no question that the deep basslines, muddy beats, and braggadocious slightly off-kiler lyrics, the acts that Def and Marl were working on under this time, sometimes using the production name M & K had not moved with the new and were eventually, and not suprisingly shelved by the suits-and-ties at Warner Bros Entertainment's subsidiary Reprise Records.

Some of these albums have appeared in various formats, but never complete with credits as is evident by the long, long sought after Sah-B debut from 1995 titled "Some Ol' Saah B Shit" that not even dedicated fans had ever heard until the great Keavin Beachman of The5thElementOnline stumbled across a promo cassette of it in a used store. Talk about lucky record shpping! Beachman also deserves a huge amount of thanks from us all, for uploading the entire album to the net for free. In an interview with K-Def with FromDaBricks a while back he concluded that he was not entirely sure that Sah's album was ever completed, but the advance rip definitely supports the fact that it was indeed completed and simply waiting for the label to give it the go ahead. In fact, the LP was even given a catalouge numer on the K-Def/Marley produced single "Summa Days" BW "Some Ol' Sah-B- Shit" in early 1995.

From what I figure there were three artists and their projects on the Reprise label that were connected to K-Def and Marley Marl; the aforementioned Sah-B album, the self-titled World Renown album (whcih you can lsiten to HERE), and last and probably the most obscure rhymer out the bunch - De' 1. Between '93 and '94, De' 1 released two singles on the label - "16 With A Bullet", and "True Homies" featuring production work by Marley Marl, K-Def and Scarface of The Geto Boys (with a little help from Southern production/instrumentalist guru Mike Dean). Before fading into obscurity following the shelving of his album "Day One", which 'Def in an interview stated he pretty much was sure had been completed. With a De' 1 guest apperance on LOTUG's "Flow On" together with Sah-B. The Lords also appeared on the released Marley Marl laced B-side "Da Underground Sound", once again together with Sah-B and even Marley himself. And the little material is all DOPE, and I would love to hear the full project as originally intended; maybe one day. I have collected all of the available songs from the original records, together with the Lords track as a bonus, which makes for a pretty cool insight into what this album could, and probably should, have sounded like. Let me know what you think of this! 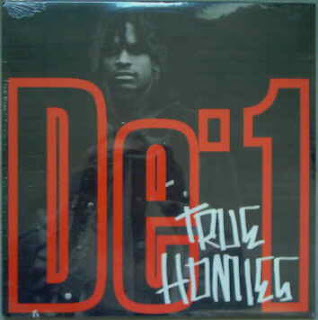