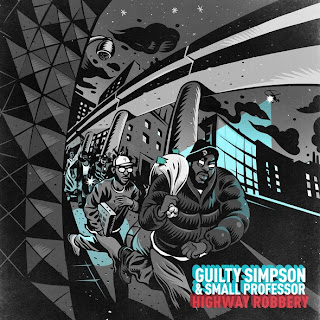 Detroit's hardest spitkicker Guilty Simpson have released several albums over the last few years, and shows no signs of slowing down at all. Since his debut with Jaylib on the masterpiece that was "Strapped", the ruff voiced emcee have constantly dropped album after album. Often utilizing one producer for each project, save for his debut every single LP since has utilized the one MC/one DJ full-length formula, with sick collaborations with Apollo Brown, Madlib, Black Milk (with Random Age) and Oh No's remix album. His new Project is slated to be titled "Highway Robbery" and is a collaboration with Philly beat head Small Professor.

Guilty has yet to dissapoint, so I'm looking very much forward to this LP which drops on Coalmine Records on September 24. Only ten tracks strong, but the first single promises good things and with guest spots coming from legends like AG, Statik Selektah, and DJ Revolution. Check out the tracklist below and mark September 24 in your calenders... Oh and if you haven't Heard it Before press play on the Soundcloud player at the bottom of this post. This is the "Breaking Bad" inspired track that was the initiation of the full-length collaboration; the original version of the albums final track "The Easiest Way".
01. Take Your Power (Intro)
02. Get That Pay (Scooby Mix)
03. I'm The City (feat. Boldy James & Statik Selektah)
04. Blap (Interlude)
05. It's Nuthin (feat. AG)
06. On the Run (feat. DJ Revolution)
07. Go (feat. Castle & Elucid)
08. Come Get Me (Outro)
09. Get That Pay (OG Mix)
10. The Easiest Way (Remix)

Posted by lost.tapes.claaa7@gmail.com at 9:06 PM