If you're reading this blog you'll gonna have to get used to seeing a lot of the late great Jay Dee AKA J Dilla AKA James Yancey, one of the best musicians of our time in my humble opinion. He got a rather large catalouge of released albums which i won't be posting here, but his production discography is pretty extensive as well and i've done a few compilations and tapes that i would like to share with y'all. If you missed the Frank-N-Dank "album", just scroll down a few posts for that neck-breaking Detroit bap. One of the artists that had a strong working relationship and firendship with Jay Dilla was Busta Rhymes who he met while working with A Tribe Called Quest as part of The Ummah. From Busta's solo debut in 1996, 'The Coming' (recommended listening) he made sure that Dilla was involved in all his solo projects up to Yancey's untimely death in February 2006 (the exception is Busta's third offering, 'E.L.E.', but he has later said that there was some kind of input by Dilla on there as well although he remains uncredited).

The collelction that i put together is something i choosed to call "TURN IT UP!!" and it features all the songs Jay Dee produced for Busta on his solo albums, from 1996 to 2006. The psychadelic hardcore introduction is snapped up from Dilla's last LP, 'The Shining', both "How We Roll" and "Keep It Popping" was recorded for, but not used on, 2001's 'The Genesis' and for good measure i threw in my favorite Dilla remix of "Whoo Haa!! Got You All In Check", straight from the single. The songs are ripped from my album collection with the exception of the 2 unreleased tracks, and being that i'm a big fan of both Dee and Busta this tape has been bangeed heavily over the last year and i think i got the sequencing together pretty damn neat as the things pretty much flow from front-to-back like an actual album. Oh and one last thing.... TURN IT UP!!!!!!!!!! 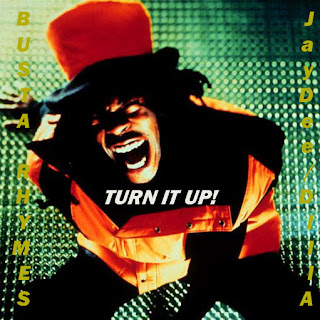 Posted by lost.tapes.claaa7@gmail.com at 3:57 AM