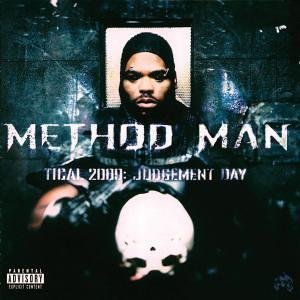 When Method Man was recording "Tical 2000: Judgement Day", one of the main producers he was working with to create the sound he was looking for was the criminally underrated (outside of Wu circles) True Master. The album caught a lot of bad flack for being all over the place and not living up to Meth's brilliant debut, but in hindsight it's actually a pretty damn good album. The LP is split up into two sections, one representing 1999 and the other representing 2000 - the new millenium, the representation of judgement day or doomsday. That second section of the album starts with a horn driven banger called "Party Crasher" that's credited to True Master in the liner notes. Fans of instrumentals soon noticed that the version included of "Party Crasher" on Def Jam's instrumental promo LP was a completely different beat. Method Man has expanded on the situation in interviews, explaining that what's heard on the instrumental album is the original True Master beat that Meth recorded the "Party Crasher" vocals over. For the retail version, an uncredited remix by executive producer The RZA was instead used, most likely as a last minute change considering the credits wasn't corrected before it went to pressing. According to Meth, he was a bigger fan of True Master's original version and was planning to add it when it came to reissue the album after enough copies had been sold. This never happened, and the original version has been added to the large pile of unreleased, almost mythical Wu cuts we're most likely never to hear. Even though we had the instrumental, the acapella version of "Party Crasher" was never made available.

Now, enter my producer homie Rusty Wu-Chain from the Wu-Tang Corp Forums who was told that excerpting only the vocal track from a mastered song was strictly impossible. Amazingly enough, Rusty actually figured out how to do this (don't ask him about it though, it's his secret). I brought him the idea of juxtaposing Meth's vocals from the album version to the beat from the instrumental promo copy so we finally could hear this long lost Method Man / True Master collaboration. There was a lot of troubles in making it a reality, but now Rusty finally has made it happen, coming through in a major way with a great blend that's a fantastic representation of what we probably would have heard on "T2" had Meth had final say on that particular song. Enjoy this one, and major thanks and props for realizing my idea(s) Rusty, you're the man!