Q-Tip (or Kamaal Ibn Fareed) is one of the illest and most creative producers of all time, yet his name is rarely mentioned among the true greats which is a shame. He produced four classic LPs for one of hip-hop's most beloved groups together with DJ Ali Shaheed; A Tribe Called Quest. He created "One Love" for NaS, three joints on Mobb Deep's classic "The Infamous" plus mixed and guided that LP alot plus and pretty much discovered and managed Jay Dee amongst many other things. His solo albums ain't no shame either, the Jay-Dee/Tip collabo "Amplified" caught some flack when it first dropped but time has treated the LP good and 2008's "The Renaissance" was easily one of the stronger releases of 2008.
It's also well known that Kamaal is a great jazz head which has been evident ever since the Tribe days, the majority of samples used on those LPs came from jazz artists like Ronnie Foster, Ron Carter and Carl Tjader. In 2002 he recorded a jazz-fusion album for Arista Records as Kamaal The Abstract, named "Abstractisisms", featuring a live band instead of samples, a few rap verses but mostly Q-Tip singing. A very different record but still very good, and one of the guest musicians on that album was jazz guitarist Kurt Rosenwinkel. To return the favor Kamaal co-produced Rosenwinkel's full "Heartcore" album, which I can absolutely recommend if you're looking for some alternative music. 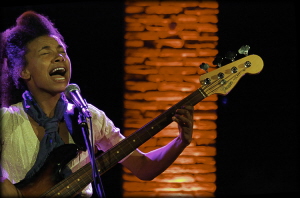 Yesterday Tip announced via Twitter that he will produce jazz bassist and vocalist Esperanza Spalding's fourth, as of yet untitled solo album. Most def one I'm looking forward to hearing.
Posted by lost.tapes.claaa7@gmail.com at 3:49 AM