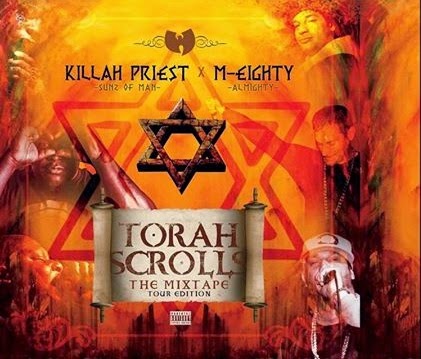 Killah Priest might be the most underrated rhyme artist on the planet, sure he does get his props, but this man is a true poet and he's extremely knowledgeable and knows how to put it across in a rhyme without coming off as preachy. As long his beat selection is thorough there's not many that can fuck with Priest, and last year 2xCD "The Psychic World of Walter Reed" was more than proof of that (for the record, I forgot about that album when I wrote my best album of 2013 countdown, but that should definitely have been in the top 5). For those of y'all who enjoyed that album he recently dropped a little EP called "The Lost Tracks of PWOWR" featuring songs that didn't make the final cut - I'm not really sure in what form he put it out though so I'm not gonna post it, but it's out there.

For "Torah Scrolls: The Mixtape" Priest hooks up with executive producer and rapper M-Eighty to release a collection of classic KP, guest features and some previously unreleased cuts. This is a good reminder to both new fans and hardcore devotees of the Sunz Of Man / Wu-Tang Killa Bee of where he came from and where he's going. Enjoy!