[Classic CDS] CYPRESS HILL - "Throw Ya Set In The Air" 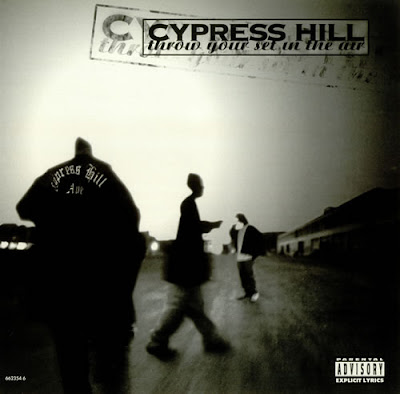 Cypress Hill during the "Temples Of Boom" era around 1995 was not to be fucked with. They were pretty much the perfect group from all aspects and '95 was their absolute peak, and say what you want but from the atmosphere, beats, samples, lyrics, the chemistry between the three members, "Cypress Hill III" is trio's undisputed masterpieces; one they never came close to duplicate neither sooner or later. Don't get me wrong, I'm a big fan of "Cypress Hill", "Black Sunday", and "IV" as well, but the aforementioned LP is up there as one of the best hip-hop albums of all time; it sold multi-platinum, making it commercial in a sense, but at the same time it's as uncompromising as any album ever was.
The 15 songs on the project are all masterpieces, but as if that wasn't enough the B-sides and remixes found on the promotional single were just as incredible. Today I will focus on the first single from the LP, presenting you with a 320 kbps rip of the original maxi-CD. We are all familiar with the main version of "Throw Your Set in the Air" but it's a powerful, unforgiving and haunting song that introuced the group's new sound to a world still unknowing what Muggs, Sen Dog, and B-Real would unleash on Hallowen, 1995. From here things get REAL interesting, as DJ Muggs gives the heads not only one but two remixes of the track; both so slamming it's not an easy task picking a favorite of them - basically they are just as good as the original, though completely different.

The "Club Remix" is hardly something you would expect to hear in a club these days, I'll tell you that. It only saves the slightest element from the original version, putting the focus on a powerful bassline that thumps along throughout the entire song while Muggs inforces it with another haunting female vocal sample, and the slightest horn excerpt. This is powerful shit though it's a smoother joint than the original, no question. Smoother is also my personal favorite version of "Throw Your Set in the Air", the "Slow Roll" remix. The BPM is greatly slowed down to some real low rider cruiser music, once again emphasizing a mighty bassline, background vocal sample, an mesmerizing rhythm track and most of all a beautiful guitar loop that gives the joint a lot of personality. B-Real sounds fantastic over this beat; in fact this is Muggs and B-Real at their finest. There was in fact also ANOTHER remix of the title track, which appeared on another version of the single than the one I'm presenting here, but you can find that on the "Unreleased & Revamped" EP from 1996 as well. That mix is closest in its musical setting to the Club Remix heard here, but is retitled "Throw Your Hands in the Air" and features the always brillaint MC Eiht, Redman and Erick Sermon alongside the power trio (watch the video below).


After the slightly more chilled out remixes, the hardcore ish is back in full effect with the album version of one of my personal favorites: "Killa Hill". Produced by The RZA for Wu-Tang Productions, the song has a beautiful mixture of the vibes of Wu and Cypress at their absolute peak; it don't get much better than this. The way B-Real's voice is repeated for a hook while Sen Dog screams about the coming revolution in spanish over this agressive murder music is as classic as it gets. Of course, The RZA and U-God both makes outstanding performances as well. With all these factors, the single is rounded off to be one of the strongest of 1995 which is saying a whole lot. If you have yet not heard the remixes, make sure to grab them below and if you don't got "Temples of Boom" in your collection.... Shame on you!!

CYPRESS HILL - "THROW YOUR SET IN THE AIR" CDM
Posted by lost.tapes.claaa7@gmail.com at 7:15 PM