Lord Finesse's "Slave to My Soundwave" 7" in February 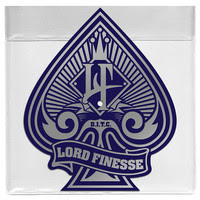 This apparantly made it's way on to the interweb a whole month ago, but I've been losing track of Slice-Of-Spice lately and I'm sure I'm not the only one this is news to anyway. As you should know, The Funk Soul Brother teamed up with indie label Slice-Of-Spice about a year ago which has resulted in lots of dope exclusive 7" singles of previously unreleased material, and the full "Funky Technician" instrumentals for the first time ever. But the run is not over, as the team is preparing more material for year 13; and first out is a new interpretation of the classic "Slave to My Soundwave", remixed by Japan's finest - DJ Muro who's giving it a mad funky touch up that's not cheap on the instruments, you got several horn instruments, turntables, bass guitar, vibes, pounding drums and of course Lord Finesse who's voice is no doubt an instrument in itself.  This sounds like it's got the potential of a masterpiece. Here's also the snippet for the instrumental and pre-order straight from slice-of-spice.com.
What's really interesting is that it seems that much of the ill-fated "Funky Man Remix Project" is finally being released, but spread out over various singles and compilations. The following listed five tracks would make a fucking deadly EP, but imagine a whole LP of this caliber.. It simply NEEDS to be released:
* "Here I Come" [Large Professor Remix]
* "I Keep The Crowd Listeninng" [DJ Premier Remix]
* "Slave to My Soundwave" [DJ Muro Remix]
* "You Know What I'm About" [Lord Finesse Remix]
* "S.K.I.T.S." [DJ Spinna Remix]
Posted by lost.tapes.claaa7@gmail.com at 10:14 AM