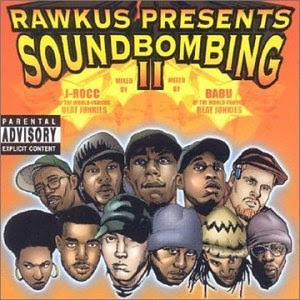 I've been collecting a few of the infamous "train car" series; the five singles that were released in compination to the Rawkus Records classic "Soundbombing II". The 27 songs on the mix CD was beautifully mixed by The Beat Junkies' Babu and J-Rocc, which of course was a strong point of the project. But sometimes you want to hear the songs in their full versinnsk with no DJ shouts, blends or virtuosic turntsblism. Luckily, there were quite a lot of singles released from the project by Rawkus between '98 and '99 aside from the 'train car' singles with their double-A sets; Thirstin Howl III's "Brooklyn Hard Rock" appeared more of an interlude on the mix but even at that,I used to hold it as one of the most powerful cuts of the entire joint so that it's actually turned out to be a four minute Brooklyn rhymes extravaganza. The final single from the mixtape to been released as a single is the classic "1-9-9-9" by the impeccable combination of underground heroes Sadat X and Common Sense. It was available for a short time on a promotional 12", as well as the A-side to a single backed with the Dug Infinite produced "Like They Used to Say". 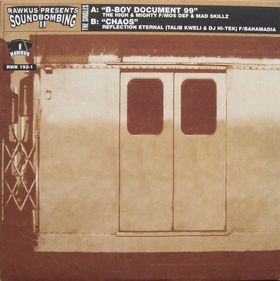 I've been wanting to do this compilation for quite some time but since I don't have all the 12":s, and have no program to rip my vinyl at the moment, and could not find the majority of rips of the singles. Very thankfully, Lost Tapes friend Fritz, like so many times before, came through and really blessed me with several of these vinyl rips that allowed me to put together this amazing compilation. Mad thanks to you Fritz, you are truly the man, and though I have sequenced it and birthed the idea of the compilation, the main brain behind this compilation, which I have choosen to call "Soundbombing II: The Singles", is Fritz so once again mad props. On a side note, the one single neither me or Fritz mangaged to find were the "On A Mission" (Reflection Eternal) / "Every Rhyme I Write" (Shabaam Sahdeeq with Smif-N-Wessun). Since both of these tracks appear in full on "Soundbombing II" and only the latter songs have a three second vocal outro I decided to include them any way.

So there you have it - Rawkus in their hey-day, dropped "Soundbombing II" with The Beat Junkies, still one of the finest mixtapes ever released. However, it's always nice to hear an often played joint in a new way, and I strongly recommend y'all to listen to these 13 classic tracks in their complete form from front to back. Trust me when I say that you won't be dissapointed. At least if you don't forget to TURN IT UP!!


'SOUNDBOMBING II': THE UNTINTED VERSION'
Posted by lost.tapes.claaa7@gmail.com at 5:11 PM