[Mixtape] AYATOLLAH - "Me Myself & Akai" 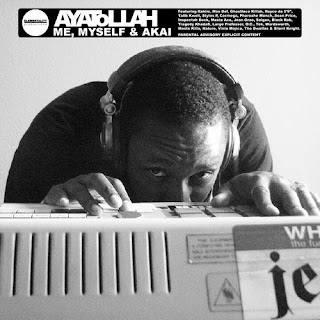 As readers of The Lost Tapes sure should know by now, the DJ K.O. helmed Elementality Productions is one of the most interesting underground labels doing at the moment. They have recently released superb free music by DJ K.O., MadKem and Silent Knight, and their latest endeavour is a full-length project by the legendary producer Ayatollah, a man who needs no further introduction. The label will release a 13-tracks instrumental album by 'Tollah on their label, which will be available on iTunes and other retailers on March 5 and is titled "Avant Garde", which hints at this being something of an unusual sound from what we've come to expect from the talented beatsmith.
With nine instrumental LP:s already to his name, it will be interesting to see what he will do with this one, especially considering it's on a new label and with a title that might raise a few eyebrows. " “I wanted people to see my different sounds and styles” says Ayatollah. While some of Tollah’s previous instrumental efforts focused on the exploration of sound, "Avant Garde" was crafted with that Rawkus-era in mind. “I really got to open up and truly get raw on the drum machine”, he explains. “I do not set out to adapt the music I make to new trends. I would rather the music I create become or set new trends on its own terms, naturally.”
While we're waiting for the first official single in early February, the label is presenting a 40+ minutes mix of the producers' biggest hits, lesser known cuts and DJ K.O. exclusives. A definite headbanger in other words so make sure to check this one out below. Peep the 34 songs tracklist here.

Posted by lost.tapes.claaa7@gmail.com at 3:05 PM