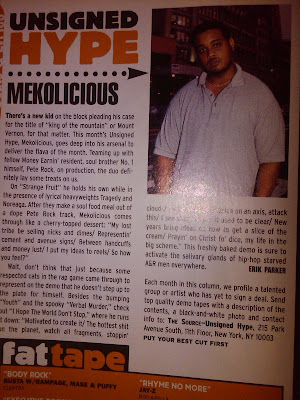 Right before Pete Rock's Soul Brother Recordings imprint through Elektra was ultimately shelved, Pete Rock put his last cards on another talented emcee that he was fully to back up and eventually produce a full-lenght album for; this took place around late '96 and early '97. Mekolicious released a few underground classics in the form of rare 12":s and radio exclusives such as "The Youth", "Meccalicious", "Hope the World Don't Stop" and "How You Feel?". All is hard to come by but still remains vintage Pete Rock productions accompanying a very talented spitter. Pete's new protogé also appeared on unreleased versions of two songs that later appeared without his verses on the producers' 98 solo album "Soul Survivor" ("Verbal Murder" and "Strange Fruit"). In addition, Mekolcious also appeared on mid-'90s collaborations with both Rob-O (on two tracks that didn't surface until several years later) and the latter's now defunct INI crew in '96; the "Center of Attention" album cut "Grown Man Sport", as well as the Rude Youth Mix of the stand-out single "Fakin' Jax which appeared on the 12" single".

These ten tracks definitely deserve a Lost Tapes complation as they are all produced by The Soul Brother; something I've been meaning to do for quite some time but it has kept slipping be my by until now; but as the sayinng goes, better late than never. Though some of the sound qualities of certain soungs leave much to be desired this is a must hear for anyone who has yet to hear it, so whatever you do don't sleep as this speaks volumes on why Pete Rock should awyays be considered one of the three greatest producers to ever to do it. So grab the link below, TURN IT UP, nod your head and imagine what a full mastered album from Mekolicious (handled mainly be Pete Rock) in 1997 or '98 actually would've sounded like. I think it might very well have been held as a true classic today. 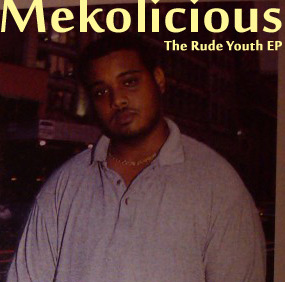 MEKOLICIOUS - "THE RUDE YOUTH"
Posted by lost.tapes.claaa7@gmail.com at 12:24 PM