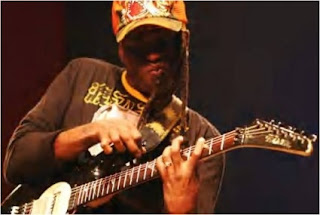 Vernon Reid was born in England, but soon move with his parents to the US; eventually picking up the electric guitar and making a name for himself as one of the most innovative, daring, skilled and experimental rock artists of all time. Throughout his career he has been a restless soul, never afraid to cross musical boundaries, creating an unique style to say the least. In 1984 he collaborated with the innovative jazz musician and guitarist Bill Frisell before assembling his own band, Living Colour, an all black NYC quartet in which he acted as the leader. Their mixture of different genres such as Punk, Funk, Metal and Hip-Hop aesthetics caught the eye of producer Prince Paul who in 1988 remixed their single "Living Colour" under the Stetsasonic name. That same year Vernon Reid also appeared on Public Enemy's "Yo! Bumrush the Show" where he laid down the guitar solos for "Sophisticated Bitch". His love for hip-hop was growing stornger and through the years he has laid down guitar parts for the likes of The Roots, DJ Spooky, Spearhead X, MC900 Ft. Jesus, Pharoahe Monch, and many more.

After the split of Living Color, and with Reid going solo things started to get really intersting; in 1996 he released his debut album "Mistaken Identity" which was an agressive but sophisticated LP that did not deal in subtlety. As expected, the guitar parts were out of this world as and to my pleasure a large chunk of the project was instrumental; the few guest spots came through hip-hop veterans such as Chubb Rock, Beans of Anti-Pop Consortium, and MC Kan who De La Soul fans remember from "Long Island Wildin'". The majority of the album is trippy, instrumetal music, with insane guitar riffs, deep bass lines, weird sound effects, turntable work, mesmorizing keys, avant-gardish saxophone, smooth turntable work (courtesy of Paul) and heavy smacking drum patterns..

But beside the immense talents displayed by one of our times' greatest guitarits, what really made me take notice of this record is the production; handled by two of my absolute favorites who I would never have dreamnt would handle an album together - hip-hop afficionando Prince Paul, who any serious rap fan are undoubtedly familiar with, on the one hand... And on the other none less than Mr. Teo Macero, the main producer behind some of jazz legend Miles Davis' (another one of my favorite artists) most unorthodox fusion records. This could turn out to be either a real mess, or one of the best produced albums of the year (it was released in 1996). It's experimental but these guys really worked great together, enhancing each other's strenghts as well as making sure that Vernon Reid was at his absolute ace. The album is now out of print, but If you ever come across it, trust me an pick up a physical copy if you ever come across it! You can always buy it via iTunes if you like what you're hearing though any serious record collector knows that ain't the same as owninf the actual record. 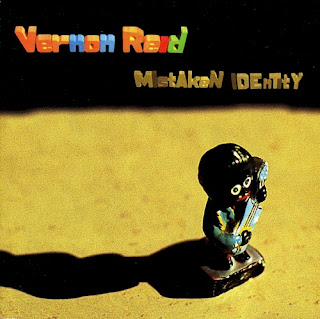 VERNON REID - "MISTAKEN IDENTITY"
Posted by lost.tapes.claaa7@gmail.com at 6:07 AM