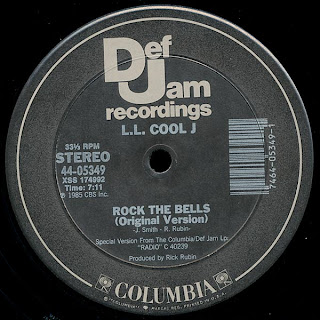 Just a couple of weeks ago I finally found an original vinyl copy of LL Cool J's masterpiece of a debut album "Radio". From front to back, this is pure hip-hop at its finest; agressive and self-confident lyrics by a youngin' that truly embodied everything an MC should be, dope turntable wizardry on just about every cut from the appropriately named DJ Cut Creator, and rugged production as rock hard as minimalist; in fact Rick Rubin's beats here was so stripped down that he's credited for reducing the record, rather than producing it. Although recorded in 1984 and 1985, with cuts like "Rock The Bells", "I Need A Beat", "I Can't Live Without My Radio" and "You'll Rock", this album still doesn't sound the least dated and together with his catalouge up to 1995 has forever cemented LL Cool J as a true living legend and trend setter in hip-hop; no matter how many weak records and episodes of "NCIS" he ever makes.

Of course, one of the craziest songs on "Radio" is the immortal "Rock The Bells" which still stands as one of the finest moments in both LL and Rick Rubin's respective careers. Released in various formats as a single by Def Jam shortly before the album was made available, the most interesting aspect of the 12" is the flipside which includes the original version of the track, clocking in at no less than seven minutes. Not only the length of this mix is different, but it's also a little less "reduced" in that it contains an array of percussive bells, adding to the theme. It's possible that this longer version was left off the final album due to time restraints, but however that may be we can all consider ourselves lucky that it didn't remain unreleased altogether. For this 12" Throwback, I borrowed a 320 kbps rip of the single from the sick blog page To The Break Of Dawn, so all praise and thanks goes out to them!