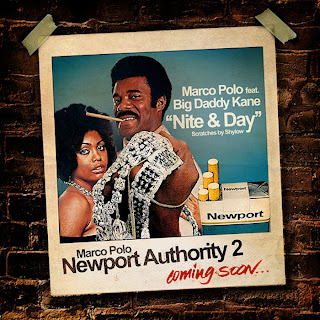 About two weeks ago we were treated to a lost Marco Polo production from Rakim's "The Seventh Seal" '09 album, "What's Wrong". Absolutely fantastic boom bap for the decade with Ra spitting his immaculate stuff as usual... The song has now turned from a Rakim track to a Marco Polo song as it will appear on his upcoming "Newporth Authority II" mixtape/street album that should be out very soon, as it's a prequel tape to Polo's official sequel to "Port Authority" sequel which drops this spring on Soulspazm Records. The mixtape is no throwaway tracks though; including the Rakim track, new music from Lil' Fame, Das EFX, Artifacts, Torae, Ruste Juxx, and more; including the collaboration with Big Daddy Kane called "Night & Day" that you can now hear below (or HERE if the embeding doesn't work).

This is incredible hip-hop at its finest, pure 2012 boom bap beats with one of the greatest lyricists of all time killing it so don't hesitate to press play and stay tuned for more info and a link for the project as soon as it drops (if it is indeed a free digital release). Enjoy the track presented here by your humble narrator, my little droogies.